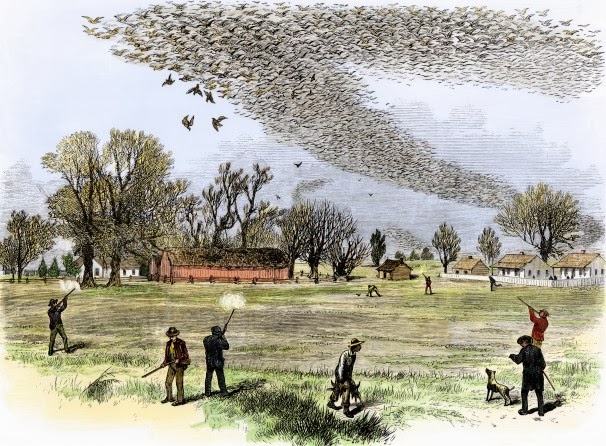 John W. Fitzpatrick, executive director of the Cornell Lab of Ornithology, writes one of the finest op-eds of the year, a stirring call to action to save vulnerable bird species of America from the fate of the Passenger Pigeon.

This year marks the 100th anniversary of the death of “Martha,” the world’s last-remaining Passenger Pigeon who died at the Cincinnati Zoo on Sept. 1, 1914. The species population once numbered over 3 billion, before rampant hunting and habitat destruction led to steep losses in the 19th century.

With alarming declines today of many bird species in America, including the Eastern Meadowlark and the Northern Bobwhite, Fitzpatrick in a New York Times op-ed offers a modest proposal:

I suggest that the broader conservation argument transcends cost efficiencies and scientific analyses and should focus instead on the moral questions posed by Martha. Most of us wish we could see those storied passenger pigeon flocks for ourselves, so why aren’t we doing everything possible to keep some of our most common wild things from meeting the same fate? Don’t our great-grandchildren have the right, as part of their American heritage, to experience choruses of meadowlarks singing “spring is here!” from treetops and fence posts?