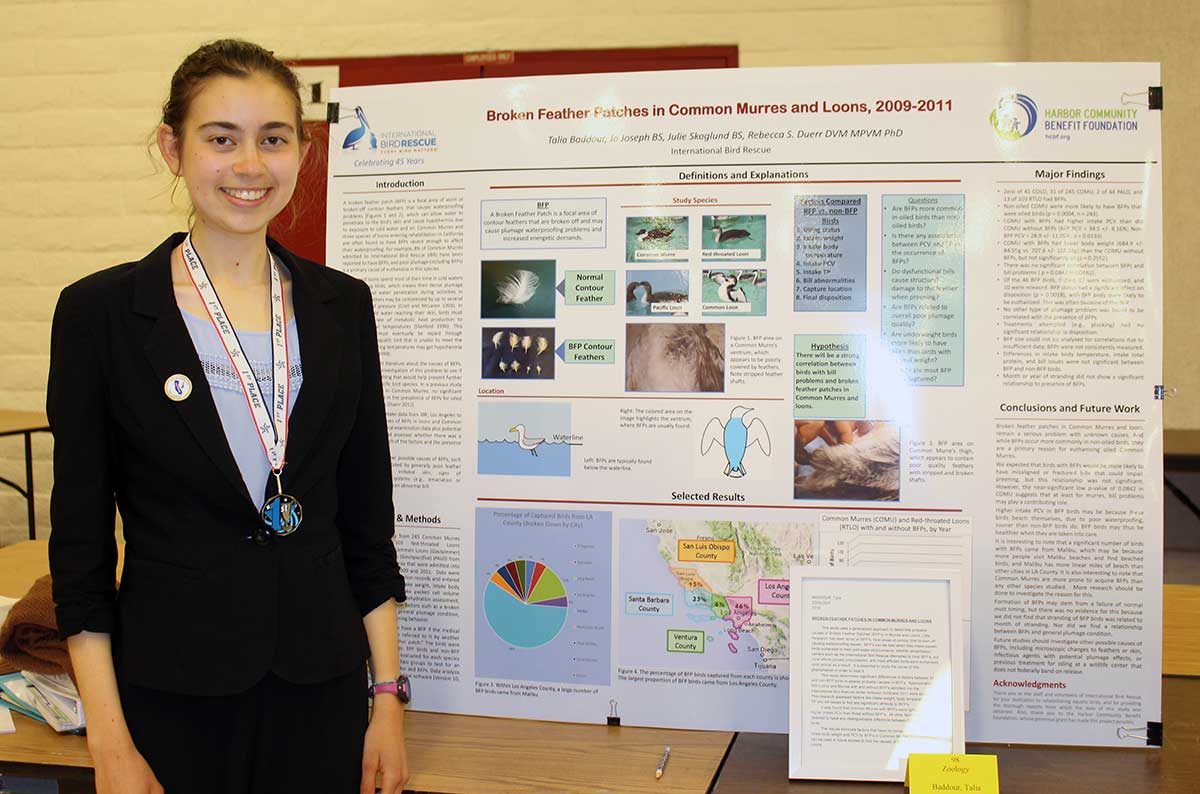 We are pleased to honor Talia Baddour, above, a recent intern at International Bird Rescue (Bird Rescue) in San Pedro, CA, who was the recipient of the first place award in the Zoology category at Palos Verdes Peninsula Unified School District Science and Engineering Fair. She was also awarded the United States Air Force Award at a science fair held at the South Bay Botanical Gardens.

Talia came to Bird Rescue through the Harbor Community Academic Internship program. This program is funded by the Harbor Community Benefit Foundation which gives local students the chance to gain experience in wildlife conservation and biology. The program also gives Bird Rescue the opportunity to connect with local students in the community. Due to the nature of the work performed at Bird Rescue, community interaction is limited. The program allows Bird Rescue to expand this interaction by granting students with an interest in animals, wildlife conservation, or biology access to see how the field operates outside the academic world.

Talia was accepted into the Harbor Community Academic Internship program in the summer of 2015. During her time at Bird Rescue, she witnessed the human impact on the local sea bird population, watched people who have dedicated their careers to mitigating this impact, and observed the importance of a positive and welcoming work environment. In her words she said “actually seeing first-hand what birds go through and how they are affected by people has helped me understand the importance of protecting them.” The internship allowed her to experience the amount of work that goes into helping injured birds and eventually returning them to the wild. She further stated the people she interacted with at Bird Rescue were “the most social coworkers I have ever had,” and they played a major role in helping her complete the research project.

The program requires the intern to work on a research project focused on a subject related to the work done at Bird Rescue. With the help of the Bird Rescue staff the intern chooses a project in an area that is of most interest to them. Talia studied a phenomenon known as Broken Feather Patch (BFP), which affects aquatic bird species such as loons and Common Murres. A bird that is found to have a BFP typically cannot maintain its plumage in a waterproof state. The BFP structurally compromises the bird’s feather layers leaving their skin to be exposed to cold ocean water, leading to hypothermia. In her research, Talia found that Common Murres are more likely to have a BFP than any other species. She also found that most birds (59%) coming in with BFPs were from Malibu beaches. This led her to theorize that because Malibu has so many miles of beach property and a high number of people visiting these beaches that the stranded or beached bird was more likely to be recovered in these areas. Finally, she noted that although BFPs were more common in non-oiled birds, they were the primary reason for euthanasia in oiled ones.

Interns have the opportunity to participate in events held by Bird Rescue. Talia helped with an event sponsored by Dawn dish soap featuring Ian Somerhalder as the guest celebrity. This event was held to raise awareness of human impact on the environment and highlighted the partnership Dawn has with Bird Rescue. The event was held at the Bird Rescue San Pedro facility and allowed the staff and volunteers to take part in educating the public. Events such as these occur frequently at Bird Rescue in an effort to educate the public about the work that takes place in this unique environment. The interns are welcomed to help and participate in many aspects.

Another benefit of the internship program is the opportunity to participate during environmental crises, such as oil spills. Interns gain first-hand knowledge and hands-on experience by aiding the staff in these events. They work in a fast-paced work environment alongside the staff and learn how bird care is performed when high volumes of effected birds are rehabilitated simultaneously.

In March 2016, Talia entered her research study in the Palos Verdes Peninsula United School District (PVPUSD) Science and Engineering fair. This event is held by The Palos Verdes Peninsula Education Foundation (www.pvpef.org). This foundation is a nonprofit organization dedicated to providing key programs and staff to the local schools. Talia was awarded first place against 18 student entries in the category of Zoology. She also won the United States Air Force Award, in a field of 115 entrants at a science fair held at the South Bay Botanical Gardens. After winning these two awards, Talia decided to continue working with Bird Rescue by volunteering in the hospital and working with the birds directly.

This internship program has proven to be highly beneficial. Interns receive the unique opportunity to interact, research, and observe the amazing work performed at International Bird Rescue. Those that have graduated the program have walked away with invaluable skills that they can apply in their future career choices.