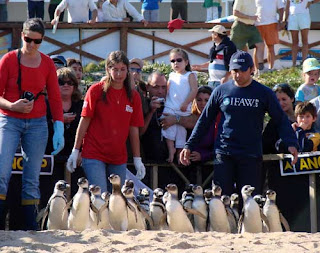 Good news following last month’s oil spill in South America: 40 cleaned penguins returned to their ocean home today off the coast of Maldonado, Uruguay. A giant petrel was released earlier in the month.

The International Fund for Animal Welfare (IFAW) Emergency Response Team and the local group SOCOBIOMA (Society for the Conservation of Biodiversity in Maldonado), led a coalition of NGOs tasked with this oiled wildlife response in South America.

All animals are tagged with IFAW bands, which will allow veterinarians and other specialists to monitor the animals after their release. ‘The information we receive on their condition, whereabouts, or even if they are stricken by another spill will let us continue our research into relevant conservation studies with these species’ said Valeria Ruoppolo of IFAW.

Seabirds are especially vulnerable to oiling. Losing their waterproofing abilities, penguins and other birds are forced out of the chilly waters in a state of hypothermia, leading to dehydration and starvation. 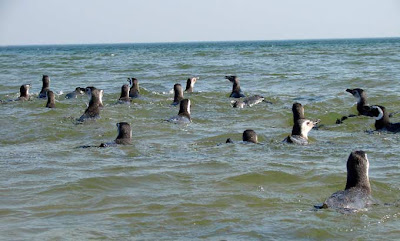 More than 14,000 cubic meters of fuel oil were spilled when two tankers collided 12 miles (20 km) from the Uruguayan capital of Montevideo. The Greek oil tanker Syros and Maltese-registered Sea Bird reportedly crashed into each other while trying to avoid a collision with a third vessel. The 24 mile-long spill drifted towards Buenos Aires and shortly after, oiled-covered birds began surfacing in Uruguay, Brazil and Argentina.

Other groups involved with the rescue of oiled birds affected by this spill include CRAM/MO-FURG (Center for the Recovery of Marine Animals) in Brazil, FMM (Fundacion Mundo Marino) and FPN (Fundacion Patagonia Natural) of Argentina. 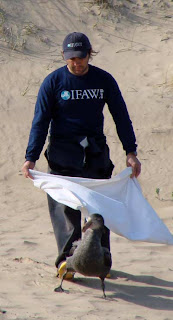 ‘This spill affected hundreds of birds around the region. Close to 150 Magellanic penguins, 4 Great grebes and 1 Giant petrel were cared for by IFAW and SOCOBIOMA alone. Due to the magnitude of this disaster, oiled penguins have surfaced in Brazil, where 56 Magellanic penguins are being rehabilitated by CRAM”, added Ruoppolo. ‘The 40 penguins that went back to the wild today were cleared for release after passing several physical requirements including blood tests, weight and body condition, waterproof feathers and other necessary characteristics we always take into consideration.’

IFAW’s Emergency Relief (ER) Team is managed cooperatively by International Fund for Animal Welfare (IFAW) and the International Bird Rescue Research Center (IBRRC) which brings over 35 years of experience responding to oiled wildlife. The team is comprised of leaders in the field of wildlife rehabilitation, biology, veterinary medicine and management who are professionals from Australia, Brazil, Canada, Germany, South Africa, UK and USA. In 2000 the team jointly led the response to the Treasure Oil Spill in Cape Town, South Africa, with Sanccob, which was the largest of its kind. This required a three-month operation involving 12,000 volunteers and ultimately of the 20,000 oiled African penguins, 90% were released back into the wild.

The IFAW ER Team has attended more than 25 major oil spill wildlife disasters around the world in recent years. IFAW’s ER team now has such experience that it is recognized as having a global presence that supersedes other oiled wildlife response organizations.