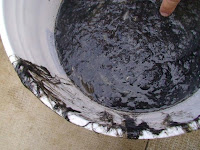 A giant mass of goo has been spotted drifting through the Chukchi Sea in Alaska.

Hunters first noticed the slime early last week, the Anchorage Daily News reports. The substance is dark and thick and can be seen for miles in the sea.

The U.S. Coast Guard is sure the mystery gunk is a biological creation and has ruled out an oil spill or hazardous substance.

The odorous substance, which has been described variously as “goey”, “gunky” and “hairy” has been also been found of the coast of Barrow, 72 miles north east of Wainwright.