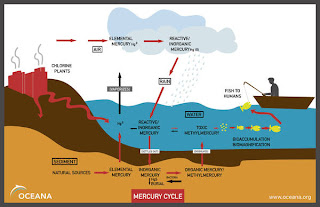 Scientists have gotten closer to figuring out why ocean fish have high levels of Mercury even though the levels of the chemical aren’t that high in surrounding Pacific Ocean waters. >> See Mercury cycle explained by Oceana

A new study has concluded that the Pacific Ocean absorbs Mercury from the pollutants in the atmosphere where it sinks and decomposes into deeper water and then releases a highly toxic form of the metal that poisons fish.

According to the report, the mercury pollution is a byproduct of coal combustion, industrial waste and other human activities. The study also projects a 50 percent increase in mercury in the Pacific Ocean by 2050 if mercury emission rates continue to climb. From the mid 1990s to 2006, mercury levels increased 30 percent in the ocean.

The study was released this month by a group of scientists from the United States Geological Survey. >> Read full USGS study

How to Avoid Mercury When Buying Fish: Oceana