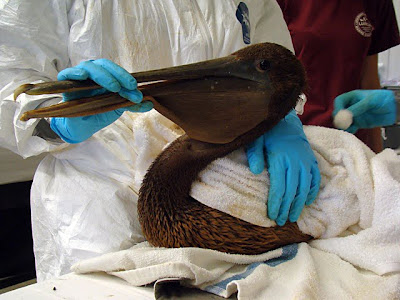 On the one month anniversary of the Gulf Oil Leak here’s the latest wildlife update from IBRRC’s Jay Holcomb:

Yesterday we received 3 more oiled birds at the Fort Jackson oiled bird rehabilitation facility. The included: One Brown Pelican, one Ruddy Turnstone and Semipalmated Sandpiper. No other birds were received at any of the other facilities. (Photo above, oiled Brown Pelican intake in Louisiana)

On Wednesday of this week we received another three oiled Northern Gannets in Fort Jackson and we continued washing and rehabilitating birds in Louisiana.

Our search and collection teams, working under the direction of the US Fish & Wildlife Service, continued patrolling impacted and other areas in the outer regions of the Mississippi River Delta region. Many healthy looking clean birds were sighted in the areas they covered and a few partially oiled birds were sighted here and there but were unable to be captured.

The complete list of birds received and under care are listed on our website A total of 27 live oiled birds have received in to Gulf wildlife care centers.

As always, we appreciate your concern,

International Bird Rescue Research Center (IBRRC) is working with the main responder, Tri-State Bird Rescue of Delaware. IBRRC has about 20 response team members on the ground including veterinarians, wildlife rehabilitation managers and facilities and capture specialists.