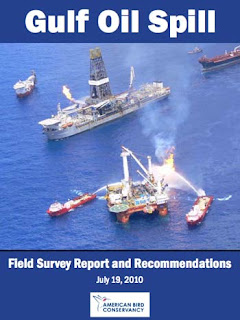 A new report released by the prestigious American Bird Conservancy this week is asking serious questions about BP’s oil spill cleanup efforts and how they may be causing more harm than good to birds and to their habitats.

According to the press release, observations are based on a just-completed week-long field assessment by ABC staff, who observed oil impacts and cleaning operations from Louisiana through Mississippi to Dauphin Island, Alabama. As part of the overview, ABC staff toured affected areas by boat with local and federal officials and charter boat captains. With Coast Guard officials, they also undertook an aerial over-flight of the spill area and points northwest of that location.

• The use of more effective boom to protect bird colonies. Numerous instances were observed where boom was in complete disarray, including being washed up on shore.

• The employment of better fencing and other measures to protect sensitive beach nesting areas and to reduce disturbance to birds. Clean-up crews were clearly unaware in several instances of the negative impacts they were causing to birds and their habitat.

• The deployment of adequately sized and equipped oil skimmers close to the coast with improved real-time oil reports to eliminate oil before it reaches the beaches and marshlands. ABC observed an instance of a substantial heavy oil slick about half a mile offshore while cleanup vessels were operating in very mildly oiled waters about one mile away – apparently unaware.

• The creation of a staging and recovery area for heavily oiled birds close to the coast. With the moving of the existing facility to a location about 70 miles away, some sort of near-shore facility is needed.

• The restoration of eroded island habitat for nesting birds. Breton Island, for example, is a fraction of its original size, is an important bird habitat and is in desperate need of rebuilding.

“Without question, I think the unqualified bright spot of the cleanup effort was the bird cleaning center in Fort Jackson. It was gratifying to see that part of the cleanup is being carried out very effectively. The staff of the International Bird Rescue Research Center seemed totally committed, but most importantly, birds are being saved,” said Parr.

“During one of our boat surveys with U.S. Fish and Wildlife Service officials, our vessel captured a clearly sick and oiled juvenile Roseate Spoonbill, and had it sent to the Center for treatment. Two days later, they brought out the bird for us to see and it looked clean and alert – much improved from the feeble state that allowed it to be simply picked up by hand off an oil boom 48 hours earlier,” Parr added.

To view the full report: www.abcbirds.org/newsandreports/ABC_Gulf_Oil_Spill_Report.pdf