• Surf’s up … and so might be your lunch, after viewing what may be one of the most depressingly iconic photos so far this year.

Photographer Zak Noyle shot this image of Indonesian surfer Dede Surinaya in a once pristine bay located on the island of Java, home to 138 million people. “It was crazy. I kept seeing noodle packets floating next to me,” Noyle told GrindTV. “It was very disgusting to be in there; I kept thinking I would see a dead body of some sort for sure.”

• Scientists at the Stellwagen Bank National Marine Sanctuary have fitted 10 Great Shearwaters with tiny satellite tags to better study feeding and foraging behavior of the species in the Gulf of Maine. In recent years, forage fish critical for seabirds and marine mammals have declined in the area. [Phys.org]

• The CBC has more info on a bizarre incident in Winnipeg, Manitoba, where dozens of blackbirds fell from the sky last week. [CBC]

• The U.S. Forest Service maintains that old-growth trees removed in April at an Oregon campground were a threat to campers, even though the area is critical 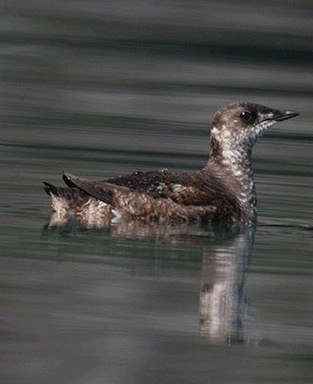 habitat for the threatened Marbled Murrelet.

A member of the Auk family that calls the North Pacific its home, Marbled Murrelets nest high in old-growth forests  — a quirk that wasn’t even discovered until 1974. Loss of nesting habitat isn’t the only problem for this bird: The murrelet’s eggs also face predation by the aggressive and abundant Steller’s Jay. [Oregon Public Broadcasting]

• NBC News travels to Seal Island off the coast of Maine to look at restoring puffin populations. [NBC]

• Long-line fishing fleets based in the Pacific are killing albatrosses, fulmars and other seabirds at record rates, according to documents obtained via FOIA request by the Public Employees for Environmental Responsibility (PEER). The organization is calling for greater mitigation efforts by federal authorities.

National Oceanic and Atmospheric Administration statistics for Hawaii-based fleets show a five- to ten-fold increase in seabird by-catch, according to the PEER news release.

“In-depth analysis suggests that the true extent of seabird harvests is significantly and systematically underestimated,” said PEER Executive Director Jeff Ruch. “Rising seabird by-catch may be yet another symptom of the intensified competition for food on increasingly exploited oceans.”

Many of the species affected, Ruch noted, are threatened, including Black-footed, Laysan and Short-tailed Albatrosses. [Common Dreams]

• The Royal Society for the Protection of Birds in the U.K. releases this sobering infographic on declining seabird populations in Scotland. A recently proposed plan to create new protected marine areas along the Scottish coast has drawn criticism from seabird conservationists, who say the proposal doesn’t go far enough to protect species such as kittiwakes and razorbills. [RSPB] 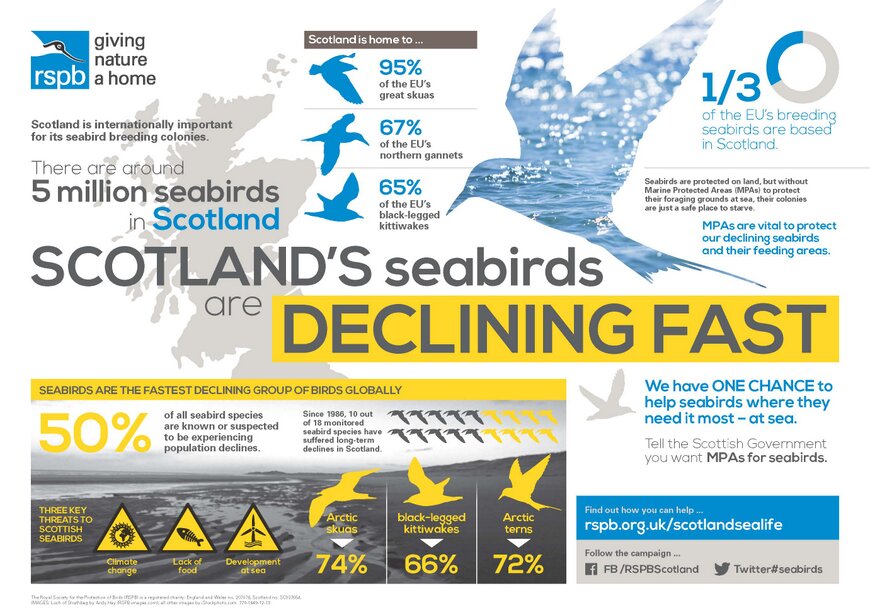