Fairfield, CA – International Bird Rescue’s long-term partner, Dawn Dish Soap, has launched a Minecraft lovers contest where players can compete to design the most creative wildlife environment for a chance to win prizes worth up to $30,000. 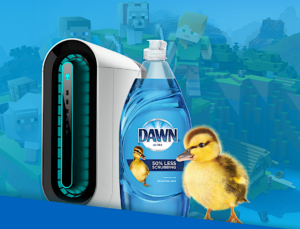 During this #DawnSavesWildlife Challenge, for each Minecraft game submission, Dawn will donate $5 to their California-based non-profit partners: International Bird Rescue and The Marine Mammal Center.

The focus of this initiative is to engage the younger generation with the hope that they will make caring for the environment and wildlife a priority in the years to come. Bird Rescue and Dawn Dish soap share a common goal to innovate, raise awareness, and protect the natural world and wildlife.

Bird Rescue Shares the Spotlight May 4th on Bird LA Day
May 1, 2019

A Day of Action to Celebrate Birds and the Environment
July 18, 2018

Healthy Brown Pelicans Returning To The Wild This Week in Southern California
June 12, 2018

Sudden Surge of Sick and Dying Brown Pelicans along the Coast of California
May 10, 2018

Media and Public Invited to View the Release of Rescued White Pelican
January 23, 2018

High Numbers of Beached Birds Showing Up Along the Southern California Coast
April 18, 2017

Last Mystery Goo seabird to be released, brings total to 165 clean birds back to the wild
April 14, 2015

State of California Funds New Aviary to Save Injured and Oiled Wildlife
September 24, 2014

New partnership with the Port of Long Beach to protect local wildlife
August 19, 2014

“Pink the Pelican,” Found in Long Beach with Mutilated Throat Pouch, to Be Released
May 29, 2014

Rescued Pelicans Return to the Wild, Get a Second Chance to Make it on Their Own
August 1, 2012

Who Cares for Birds? Celebrating Our Bay Area Roots With 40th Anniversary Event in Berkeley
April 9, 2012

Transcript available from May 10 Teleconference on Gulf Oil Spill Bird Rescue
May 12, 2010