Michelle Bellizzi, our San Francisco Bay Wildlife Center Manager, has worked for International Bird Rescue for 11 Years. She has responded to many oil spills, including one off the coast of southern Argentina in 2008 during which she learned a great deal about washing and caring for oiled Penguins. Her Penguin and general rehabilitation experience make her an essential part of the New Zealand oil spill response effort.

I’ve been in Taur 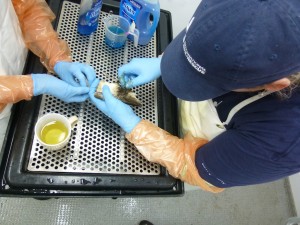 anga, New Zealand since October 14. Tauranga is pronounced “Toe-wronga” with a soft “g” (I practice at night, but I still can’t say it right). I now understand why one of International Bird Rescue’s first interns, a New Zealander named Gary Ward (now a keeper and breeder at the Jersey Zoo in England), always pronounced my name differently, and have also realized that his enthusiasm and passion is truly a part of his Kiwi culture.

When we arrived, I was taken aback by the welcome from everyone at the center. It was instantly as though I were welcomed into a family – an amazing, passionate, fun, capable, and hardworking family. They were already caring for incredible birds (as all birds are) at the facility:  Little Blue Penguins, Pied Shags, Dotterels, Terns. The Penguins are tiny by Penguin standards, weighing in at ~1kg, but they’re not just called Little Blues because of their size – the feathers on their backs are really blue/green, and intricately patterned.

I was assigned to work in the bird washroom, where over 100 birds had already been washed. During times when the washroom isn’t busy, our team also become bird “tubers” (gavage-feeders), cage cleaners, pool siphoners and general handypersons. Washing is one those things that is the same just about everywhere, even though our washroom here is a tent which shakes violently in the spring wind, and washing Penguins requires extra attention to detail. Compared to those of other birds, Penguin feathers are very tightly packed, and the ones on their wings (which look like flippers) are very, very short. After a few days together with Massey University staff, we had trained several others to wash and rinse the birds, and I became a member of the “Washed an Oiled Endangered Dotterel Club” (so far, there are two members!).  Thankfully, the washes went well and the birds are recovering, hopefully no worse for wear.

I am incredibly honored to work with each and every person and bird.

International Bird Rescue still has 6 response team members stationed in New Zealand to help Massey University manage and operate the oiled bird rehabilitation center that has been set up after the cargo ship Rena hit a reef and spilled oil into the ocean impacting hundreds of seabirds.