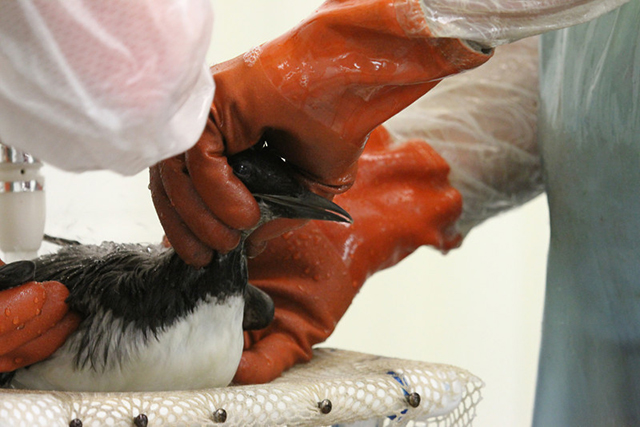 Important note: Caring for oiled wildlife requires comprehensive training on appropriate protocols. If you are interested in volunteering for International Bird Rescue, please visit our volunteer page for more information.

Since February 1, IBR’s center, located in San Pedro, has received 77 oiled birds, mostly Common Murres — diving birds that nest on high cliffs and spend most of their lives on the open water. Western Grebes and Loons have also been affected by the natural seepage, and have been found emaciated and suffering from hypothermia on beaches from Malibu to Newport Beach.

“Since this isn’t an official oil spill, there isn’t an organized effort to capture these birds,” said IBR executive director Jay Holcomb. “They are found by the public one at a time and brought to our center for care. We estimate there are more birds out there that are not being picked up.”

Because these oiled birds are affected by natural seepage rather than a human-caused oil spill, the high cost of rehabilitating these animals falls largely on IBR and other area wildlife groups.

“Our staff and volunteers are in the midst of an oil spill with many birds needing daily care at our center,” Holcomb said. “Little attention is paid to these natural events because there is no responsible party, such as an oil company, to pay the costs. The responsible party in this case is Mother Nature, and she does not come with a credit card.”

Natural oil seepage occurs in many places along the Southern California coast. Coal Oil Point in the Santa Barbara Channel, for example, is the world’s largest natural seep, emitting thousands of gallons of oil every day.

How Can You help?

Some of IBR’s costs for natural seep events are offset by support from the California Department of Fish and Wildlife. But the nonprofit has significant expenses in rehabilitating these bids and is asking for donations. If you’d like to help, click here to donate. 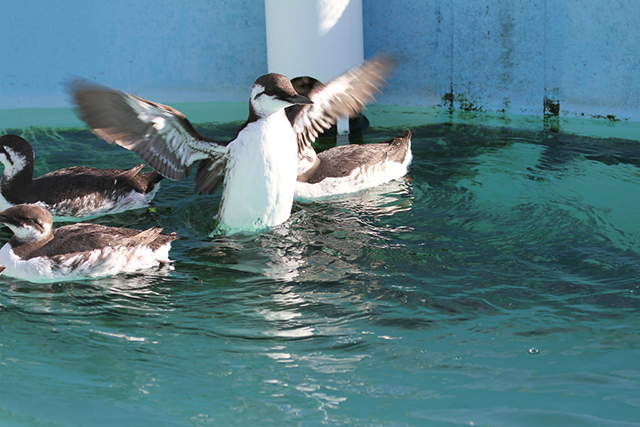 Photos and video by Bill Steinkamp