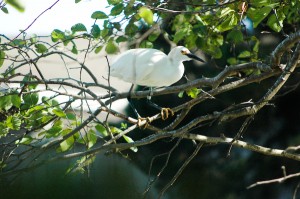 ever been close to a heron rookery you know that it is an extremely busy place, with squawking adults feeding equally loud and active chicks. The rookeries usually contain mixed species such as Snowy Egrets, Cattle Egrets, Great Egrets and Black-Crowned Night Herons. Some of these colonies can be found in urban areas such as parks and road strips where mature trees create an appealing nesting canopy.

Less than two weeks after hatching, heron and egret chicks begin to perch on branches and stray a bit from the nest. At that point they are called branchers, and sometimes they are seen hanging upside down as they work to regain their balance. Some of them fall from their nests, and those that survive the fall either climb back up through the lower underbrush or die.

Heron rookeries in urban environments have a unique problem. To maintain a clean and park-like environment, city workers remove unsightly underbrush and mow lawns under the rookeries. With no underbrush to cushion their landing, falling chicks plummet to the earth. The ones that survive can’t get back to the branches without the underbrush. Returning them requires large trucks and many people, and the subsequent panic in the rookery leads to even more fallen chicks. The safest and most responsible alternative is to raise fallen chicks at our Wildlife Care Centers and release them when they mature.

Every year International Bird Rescue raises over 100 chicks from urban heron and egret rookeries around the Bay Area. They are released back into the wild with federal bands on their legs with the hope that someone will sight them in the future.

The following is the story of one such bird. 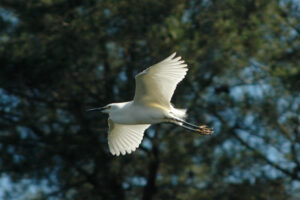 Put a metaphoric feather in the cap of International Bird Rescue! A young, compromised Snowy Egret nestling which was rehabilitated at International Bird Rescue’s San Francisco Bay Wildlife Center in Cordelia has been re-sighted very much alive — attempting to breed, in fact — at the Egret Rookery on Alameda’s Bay Farm Island this May, nearly a full year after it was returned to the wild.

This Snowy Egret was successfully rehabilitated by the dedicated “shoestring crew” left behind to maintain full operations at International Bird Rescue’s San Francisco Bay center while most of International Bird Rescue’s senior staff and many of its long-time volunteers were deployed in the Gulf region last year alongside Tri-State Bird Rescue (where their expertise was needed to rescue and rehabilitate wildlife impacted by the spill). Because “Every Bird Matters” at International Bird Rescue, this bird enjoyed the world-class care that every one of the 2,400+ animals treated each year at the SF Bay wildlife center receives thanks to the center’s veteran staff and its well-trained crew of hard-working volunteers. The bird spent 18 days at the aquatic bird rehabilitation facility gaining weight and strength — while honing its essential flight and foraging skills — after it was rescued from traffic dangers in Santa Rosa by a conscientious citizen who had saved the bird last spring (May, 2010).

The location of this Santa Rosa rookery, where this bird was found, poses deadly challenges for fledgling Egrets who must dodge vehicle traffic while learning to use their young wings during their first days and weeks of flight practice beyond their nest trees. Fortunately, compassionate citizens in Santa Rosa have been proactive at trying to prevent tragedy and, when necessary, have been rescuing “stranded” egrets from the town’s streets each year!

The East Bay Regional Park District of Alameda and Contra Costa County played an important role in this bird’s successful return to the wild. Once International Bird Rescue’s rehabilitation process confirmed that this young Snowy was both able to fly well and forage successfully for himself, the juvenile bird was banded with a federal band on one leg before being returned to the wild in a safer location. Last June, at the Martin Luther King Jr. Regional Shoreline Park in Oakland (a short egret flight from Alameda’s Bay Farm site), which protects hundreds of acres of suitable foraging and roosting habitat, this young Egret was released by an EB Park Ranger with help from an International Bird Rescue volunteer. The release site and its contiguous environs have been restored over a period of many years by the East Bay Regional Park District with much help from Save the Bay and the Golden Gate Audubon Society. Warm thanks are due to EB Parks’ MLK Ranger Staff and stewardship personnel for their great cooperation with this process, and to Save the Bay and Golden Gate Audubon for their ongoing restoration efforts which helped this bird to survive and flourish to reach breeding age, an important milestone. Based on observed behavior during much of May, 2011, this energetic male Snowy Egret seems quite intent on fathering some offspring at the Alameda Bay Farm colony site in his very first breeding season!

San Francisco Bay Bird Observatory collaborates with Audubon Canyon Ranch to provide ongoing scientific monitoring of all known colonial nesting water bird populations of the greater Bay Area, including the Santa Rosa Rookery Site (ACR) and the Alameda Bay Farm Site (SFBBO). SFBBO’s volunteer monitors’ most recent survey confirmed 25 active nests in the Egrets’ favorite Pine tree on Bay Farm Island, which both Great Egrets and Snowy Egrets call home (while egrets have roosted in this vicinity for years, Bay Farm Island has been a known nesting site only for the past 4 years).

It’s encouraging to realize that work of so many different wildlife organizations yielded a noteworthy result which all can celebrate in the form of a beautiful wild bird restored to his rightful place in our Bay-area ecosystem! This handsome Snowy Egret is now thriving thanks to the conscientious efforts of can-do rescuers, wildlife rehabilitators, habitat stewards, wetland restoration teams, and wildlife monitors. If the Snowy Egret owes everyone a “thank you”, surely, the sight of him — and the sounds of his lively breeding vocalizations — will suffice quite nicely for all concerned!