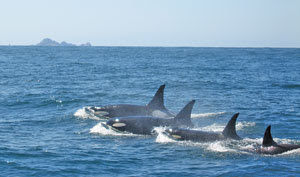 The extraordinary sighting of Orcas or “Killer Whales” in Northern California offshore waters is making the news this week.

About 40 Orcas were spotted late last week in the Gulf of the Farallones around 20 miles from the Golden Gate Bridge. Another group was also seen in the Half Moon Bay area feeding on a harbor seal.

The mammals usually are found in the Puget Sound area of Washington state, but it’s not unusual for some pods to venture south to feed on the abundant waters in Northern California. The Orcas are striking with their black and white colorings and can grow to at least 30 feet in length as adults. There was also a group spotted in January 2007. See SF Chronicle story

Like other pack animals, killer whales hunt in groups or pods for food. They work together and encircle and move prey into smaller areas before attacking. The animals feed on fish, squid seals, sea lions, walruses, sea turtles, otters and even birds.