At Bird Rescue, our main efforts focus on seabird rehabilitation and oil spill response. Tracking rescued and rehabilitated birds after release provides us with valuable information, however, effectively capturing this information can prove challenging. One non-invasive and highly effective tracking approach is to place ID markers-loose, unobstructive, plastic and/or metal bands-around one or both legs. These enable us to gather data on returning patients, live sightings, breeding success, travel patterns, and life span.

As a permittee with the USGS Bird Banding Lab (BBL) since 1979, we have been placing steel federal bands on nearly all released birds. Since that time, we have received over 2,000 band sighting reports from the BBL. These reports are used to support our research projects and to keep track of notable cases. For instance, over the years we have placed 15 bands on Laysan Albatross, extremely rare visitors to our centers. One of these birds, banded at our San Francisco Bay center in 1979, has been sighted in the wild three times. This feisty bird, aptly nicknamed Munch by the media, was first sighted breeding in Hawaii nine years after being released! Read more about Munch. The fact that birds thrive and survive after release is a great testament to the work that we do. Additionally, this is the only way in which we can accurately and effectively find out what happens to them after being released.

Our current banding program has come a long way since 1979. We now operate a number of species-specific banding programs in addition to our species-wide federal banding program. For some species, our permitting allows us to place an additional colored plastic band with large and easy to read lettering on the leg opposite the federal band. Because of the difficulty in reading from afar the engraved numbers on metal bands on live birds, the colored bands greatly increase the live sighting reports that we receive for these species. More information on both our federal and color banding programs can be found below; please report color band sightings on our website

Just prior to being released, every rehabilitated bird (except those with precluding medical issues, such as a recently healed leg fracture) receives a steel leg band marked with a federal ID number issued by the USGS Bird Banding Lab (BBL). The BBL maintains a database of all federally banded birds in the US. We are proud to participate in this program and pleased to have received numerous sighting reports over the years. For more information on the BBL and to report sightings not relevant to this page, please visit this reporting page at The Patuxent Research Refuge Bird Banding Laboratory

As both an iconic California-coast seabird and a popular patient at our centers, the Brown Pelican represents a species of special interest to Bird Rescue. These birds have faced many challenges over the years, relating to oil spills, fishing tackle entanglements, prey shortages, El Niño weather patterns, and recent removal from the Federal List of Endangered and Threatened Wildlife. Monitoring this species is of major interest to both Bird Rescue and the U.S. Fish and Wildlife Service (FWS)

Previously, the majority of reports with accurate federal band numbers came from the carcasses of deceased birds. This provides us very limited information on the active life of the animal after release. In an effort to increase the number of reports of live sightings, we initiated the Blue-Banded Pelican Program in 2009. In addition to the metal federal band, each Brown Pelican receives a large, blue plastic leg band bearing easily readable white numbers. Since starting this program, the rate of live Brown Pelican sighting reports has greatly increased. Report a sighting of a blue-banded pelican.  The blue band IDs that we use feature a single letter followed by two numbers.  See below for other programs using different letter/number/color combinations. 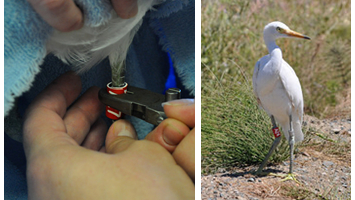 Every year we raise hundreds of orphaned Snowy Egrets; to help identify these birds in the wild, in 2010, we started using small, non-numbered red plastic leg bands in addition to the metal federal bands. This program was a great success with numerous reports of these birds, once young orphans themselves,  raising young of their own. Thus, we opted to upgrade this program in 2012, by adding white numbers to the red bands allowing us to match a sighting with a specific case history. We frequently receive reports of red-banded snowy egrets nesting and raising young at the egret colonies in Alameda and Santa Rosa, CA. Report a sighting of a red-banded snowy egret

We rehabilitate hundreds of orphaned Black-Crowned Night Herons per year. These crepuscular (dusk and dawn feeding) herons often share a similar habitat with Snowy Egrets, living in harmony with them because their different feeding habits lead to reduced competition for space and resources. Black-Crowned Night Herons are one of the most frequent patients at our centers, so tracking them allows us to assess one of the major components of our rehabilitation program. In 2013, we began using white plastic leg bands with black lettering in addition to the metal federal bands. If you spot one of these banded herons, please report your white-banded black-crowned night heron sighting

In spring of 2021, a disturbance to a nesting colony in Long Beach Harbor caused not-yet-flight chicks to fall from the barge they had nested on and into the water with no way back out. Hundreds came into our LA Wildlife Rehabilitation Center to receive care. Floating platforms have been setup to prevent further nest abandonment and separation from parents. Once the terns are releasable, they are marked with a metal leg band on one leg and either a red or orange leg band on the other leg. During this event, a temporary pink feather ink was used for enhancing visibility of rehabilitated chicks to aid our team in monitoring the colony. If you see one of these ink marked or banded Elegant Terns, please report your Elegant Tern sighting here.

Other organizations involved in avian rescue and research often have their own banding programs, which we sometimes take part in. These cooperative efforts may include: in-house rehabilitation of a bird previously banded by an outside organization, collaborative oil spill response work, or direct participation with outside banding research projects. Together, these banding efforts, whether separate or interactive, help provide and maintain information that is valuable for improving habitats, determining protection status by both the California and Federal Departments of Fish and Wildlife, and monitoring program success.

As a member of the Oiled Wildlife Care Network (OWCN), our facilities act as primary care centers for oil spill response in California. In the spring of 2015, a pipeline began leaking crude oil near Refugio State Beach in Santa Barbara, CA. Together with the OWCN, we assisted with the rescue, rehabilitation, and release of 46 oiled birds. Rehabilitated Brown Pelicans from this spill were marked with green plastic bands (with white numbers) to better identify birds specifically affected by this spill. The OWCN is collecting this information to aid in evaluating the long-term success of the spill response effort. Report a green-banded pelican to the OWCN

Black Rail Project at the University of California, Berkeley

The Black Rail, an elusive bird in the wild and rare patient at our centers, has generated excitement from both the researchers at the University of California at Berkeley and the clinic staff at Bird Rescue. In 2014, we received a baby Black Rail the size of a cotton ball! A victim of a cat attack that resulted in a broken mandible, this bird was successfully rehabilitated and released. It was banded in conjunction with the Black Rail Project at UC Berkeley, which operates a number of rail banding programs to effectively monitor their habitats and populations. Since then, we have continued to work with the team at UC Berkeley when banding Black Rails, and we look forward to continuing this partnership aimed at improving monitoring efforts. 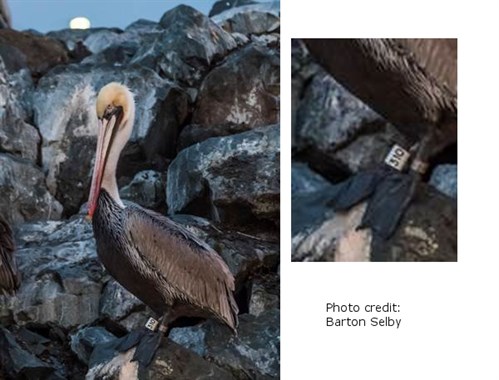 The Wildlife Center of the North Coast (WCNC) is a wildlife rehabilitation facility in Astoria, Oregon.  In collaboration with Pacific Eco Logic (PEL) and the USGS, they initiated a Brown Pelican color marking program in 2009, using white bands with black lettering.  PEL performs regular monitoring surveys along the Oregon, Washington and California coastlines.  White band sightings contribute to studies of distribution patterns and ecological associations of pelicans that once got into trouble at the northern end of their habitat range.  If you have sighted a white-banded Brown Pelican, please report the sighting directly to the USGS Bird Banding Laboratory

Large red leg bands with white lettering are used to band juvenile Brown Pelicans from breeding colonies on the Baja California Pacific islands.  This banding program is a means to monitor the success of the Montrose Restoration Project that began in 2013 in an effort to restore populations of seabirds affected by DDT and oils spills.  The Red-banded Brown Pelican Program is managed by the Grupo de Ecología y Conservación de Islas, A.C. (GECI), a Mexican conservation organization focused on preventing species extinction and protecting habitats of islands in Mexico. The current range of California Brown Pelicans extends from their breeding grounds in Baja California and Southern California to their non-breeding grounds as far north as British Columbia, Canada.  If you spot a red-banded Brown Pelican, please report the sighting to the USGS Bird Banding Lab.  You may also send the details via email to anillos@islas.org.mx

Brown pelicans are one of our most frequently re-sighted birds. Occasionally, we get in questions on birds sighted in the gulf or on the east coast. It is very rare that to get a report of a California Brown Pelican banded at International Bird Rescue to make it over to the east coast. Note that our blue bands use a single letter followed by two numbers; any other combination is likely a band from elsewhere.

For example, Brown Pelicans banded during the 2010 Gulf of Mexico Deepwater Horizon oil spill were fitted with pink, red and orange leg markers. These should be reported directly to the Bird Banding Lab

Green and blue colored leg markers using different letter/number combinations than ours have also been used in Texas, Alabama and Florida. For more info on these banding programs and to report a sighting of a blue or green banded bird in the gult, please go to the Pelican Project’s website operated by the U.S.G.S. South Carolina Cooperative Research Unit and Clemson University.