Skip to content
Home | Blog | Patient of the Week: A Wayward Brown Booby 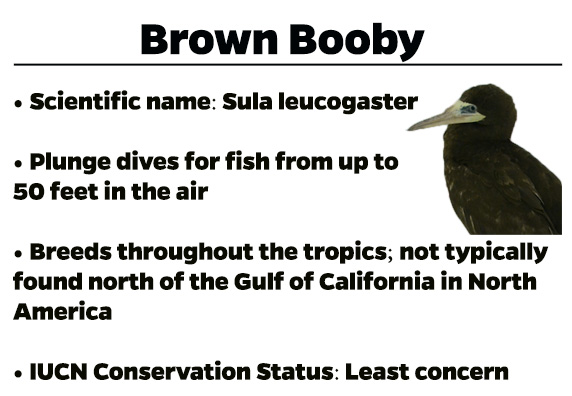 Over the past year or so, we’ve seen several cases of Blue-footed and Brown Boobies traveling far beyond their usual tropical and subtropical ranges. An “invasion” of Blue-footed Boobies occurred in Southern California last fall, while over the holidays last year, a Brown Booby found beached in Northern California was transferred to our San Francisco Bay center from our friends at WildCare in Marin County.

This latest Brown Booby came to us from Alaska, nearly 3,000 miles from the species’ northern range in the Gulf of California.

According to SitkaNature.org, the animal was found on a fishing boat near Kruzof Island, and was transported to the Alaska Raptor Center. There, wildlife rehabilitators assessed the animal and found the booby had a wound on its back in addition to being cold and thin.

We don’t know why this bird flew so far north, though atypical weather patterns have certainly been documented in recent months. SitkaNature.org points to unusual warming patterns in several areas of the North Pacific, for example.

Two challenges were evident here: One, to get the bird healthy again, and two, to get it as close to a Brown Booby’s normal range as possible. In the case of the Northern California booby we treated last year, the patient was transported down to our Los Angeles center, much closer to this plunge-feeding bird’s range.

With the help of Alaska Airlines, our patient of the week was flown in an animal crate south to LAX, where our team picked it up and brought it to International Bird Rescue’s LA center, located about 20 miles away.

After loading her in the car, I peaked into the crate to find her actively preening. Once she arrived at the center, she received a full exam and began self-feeding right away.

We did find she is favoring her right leg. [X-rays] revealed nothing significant, so we are giving her warm water pool therapy to see if it helps her.

We’ll keep you posted on this remarkable patient! Many thanks to Alaska Airlines and the Alaska Raptor Center.