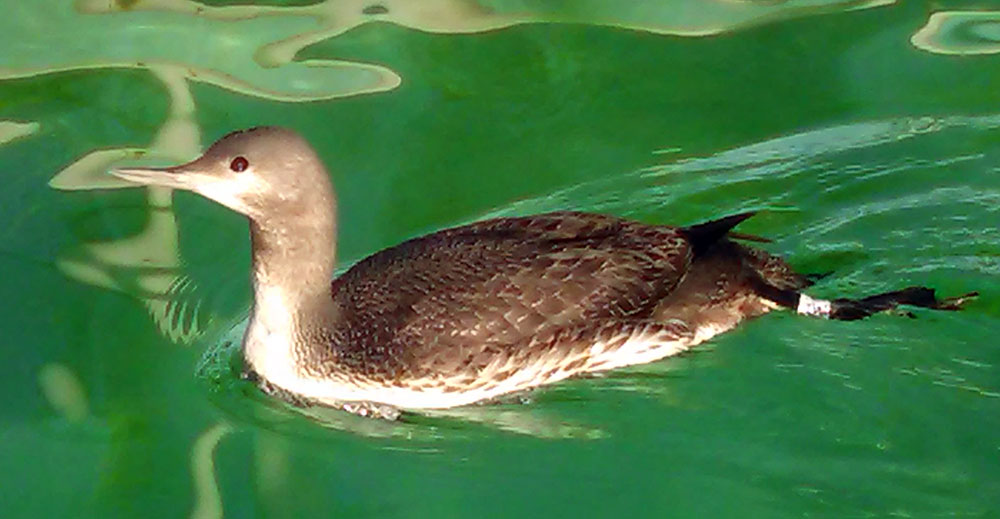 This lucky loon recently made an unscheduled emergency landing on a Long Beach Airport runway. The Red-throated Loon (Gavia stellata) is now in care at our Los Angeles Center in San Pedro.

The bird was found and captured at the busy airport on October 21, 2015. It was reported by airport workers to be dazed and confused. Upon intake the bird was given a full exam and and was found to be severely emaciated with some minor toe abrasions.

Since arrival 15 days ago, the hungry loon has gained 200 grams. Its now living full time in one our pelagic pools and eating lots of fish. This bird is very active in the pool diving a lot as well as vocalizing.

Red-throated Loons is among the smallest and lightest of loons. Its breeding plumage is more blackish-brown and includes a striking deep red throat. In non-breeding plumage (current patient), it is mainly light gray with a speckle of white.

In North America, this loon species winters along both coasts – ranging as far south as the Baja California Peninsula and the Gulf of California in northwestern Mexico. In other parts of the world, its known as the Red-throated Diver.