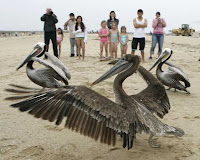 After 40 years of being on the precipice of extinction the Brown Pelican is poised to be removed from the national endangered species list, according to recent announcement by the U.S. Interior Department. See: National Geographic report

The pelicans were put on the endangered species list after the use of the pesticide DDT caused catastrophic reproductive failure in the late 1960s. The pesticide affected pelican eggs and the reproductive health on these majestic birds. When DDT was finally banned in 1972, the pelican population slowly made a rebound. Now at least 70,000 breeding pairs of pelicans now live in California and Baja California.

IBRRC treats hundreds of sick and injured pelicans each year at its two bird centers in California. Most recently, pelicans have been affected by domoic acid or algae bloom outbreaks along the California coast. And fishing line injuries continue to rise as man encroaches on more of this birds’ habitat.

The legacy of DDT is still with us. Scientific studies say that the ocean floor off the Palos Verdes Peninsula in Southern California remains highly contaminated by the pesticide. The Montrose Chemical Company, a Torrance manufacturer of DDT, dumped pesticide laden wastewater into storm drains from 1947 to 1983. An estimated 1,700 tons of DDT made its way to the Pacific Ocean. DDT settled on the ocean floor and the EPA is still dealing with the issue. Since 1985, fish consumption advisories and health warnings have been posted in this area because of elevated DDT and PCB levels. Bottom-feeding fish are particularly at risk for high contamination levels

New report: How the waters off Catalina Island became a DDT dumping ground