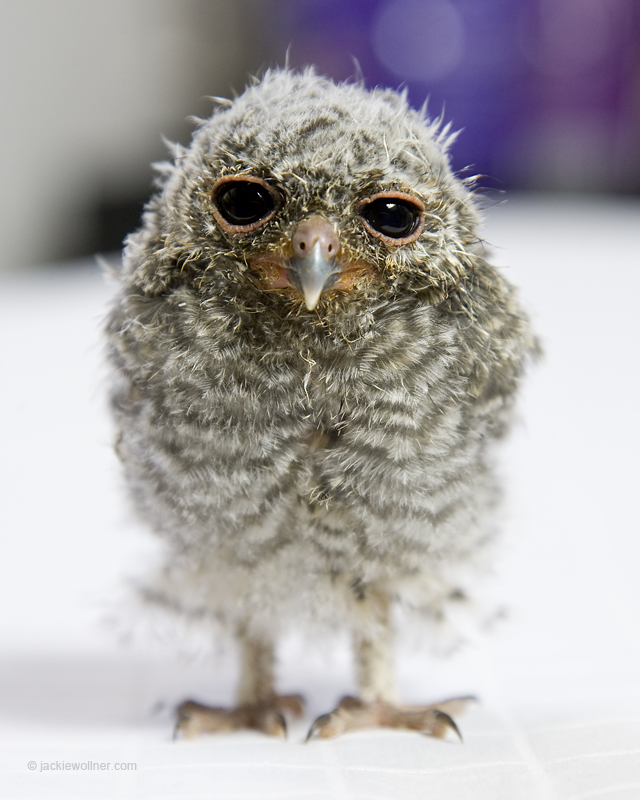 On International Bird Rescue’s Facebook page, there are some photos we post to our loyal following that become instant viral hits, viewed and shared by thousands. The images that resonate are usually either of young and delicate birds (orphaned Pied-billed Grebe chicks, for instance) or of a species looking the camera squarely in the eye with haunting eyes (a Laysan Albatross recently released by our Los Angeles team off the Pacific Coast).

The latest such image to strike a chord meets both criteria: a Flammulated Owl nestling, photographed by Jackie Wollner of Los Angeles. Even at full size, this owl, which lives in old-growth forests of the West, weighs little more than a golf ball. “This is why I miss wildlife rehabilitation… I loved that job,” one Facebook commenter wrote upon seeing the nestling.

Wollner has volunteered as wildlife rehabber (she was trained by our own Dr. Rebecca Duerr) and is an avid photographer of many species International Bird Rescue cares for year round. Here are some of her favorite shots and the stories behind them. 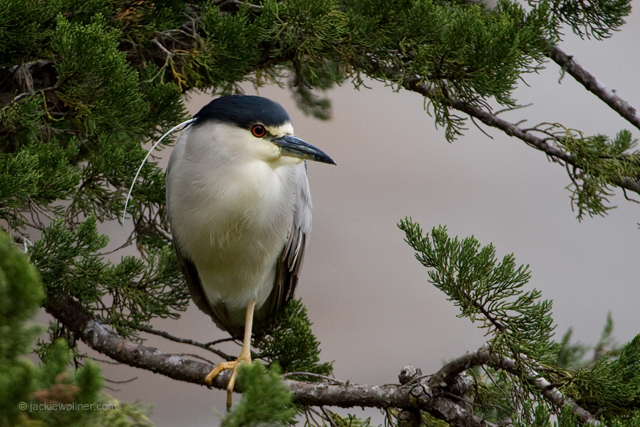 Black-crowned Night Heron, Morro Bay, Calif. Wollner: This shot was taken in heavy mist and low light. I don’t think it would have been as interesting in bright sunlight.

Wollner: I got started with birds as a child because my mother is an animal lover. We spent a lot of time observing the creatures that surrounded us where I grew up in rural Pennsylvania. Some years ago I helped rescue a House Sparrow, and I was hooked. Eventually I volunteered as a wildlife rehabber and was trained by International Bird Rescue’s own Dr. Rebecca Duerr when she was animal care director at another facility that cared for a lot of songbirds.

Regarding photography, I should point out that if it isn’t already clear from my shots, I am an amateur photographer. But I have always appreciated photography. I tell my friends, “I want to see all your vacation snaps” and I mean it. I first started playing around with film photography in college. When digital cameras became available, I really dove in. I grew exponentially as a photographer when I could shoot without the care of wasting film, chemicals or money. Plus the feedback was instant. 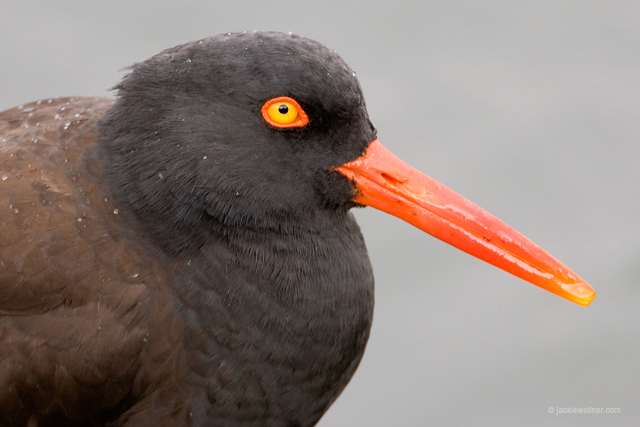 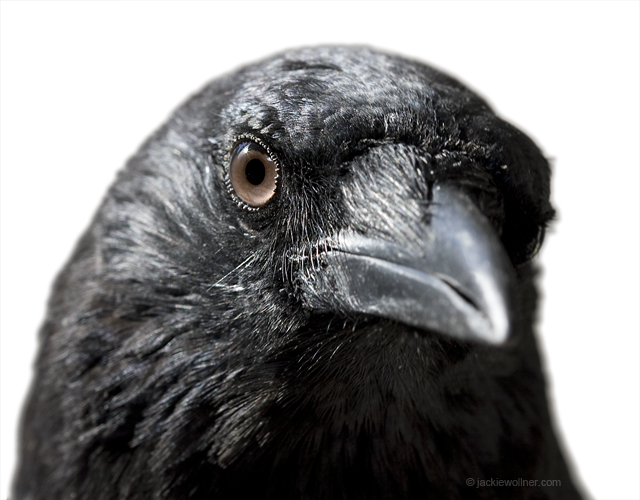 American Crow in rehab care. Adult crows appear to have almost black eyes. This photo was taken in front of a window. The bright light coming over the bird’s shoulder illuminated its eye in an unusual way.

But what I really want to say about camera choice is that it doesn’t matter a lot. I have no opinion about Canon vs. Nikon. Both are awesome. I’ve seen excellent photos taken with point-and-shoots and even camera phones. It’s kind of a running joke among photographers that people say “That’s a great photo … What camera do you have?” The key is to have a good working knowledge of the equipment you do have, its possibilities and limitations. Also, you need a connection with the subject and an ability to edit your own shots. Editing is the most underrated, under-discussed topic in photography, in my opinion. When I say editing, I don’t mean photoshopping, I mean the ability, and moreover the willingness, to look at the 150 shots you took of an oystercatcher and pick just one or two to show people. It’s while I’m editing that I may refer photography as my “onerous hobby,” but I can’t overstate the importance of it.

When I edit, I first throw out everything with technical flaws, i.e. exposure, focus, etc. Sadly, this is still a lot of shots in my case. Then I look for the shot that communicates the most. Does it tell a story? Above all, is it emotional in some way? I have an engineering/science background, and I know the problems of anthropomorphizing. But as someone who is passionate about conservation, getting the public to care is the first step. People have to feel something before they act to preserve it. 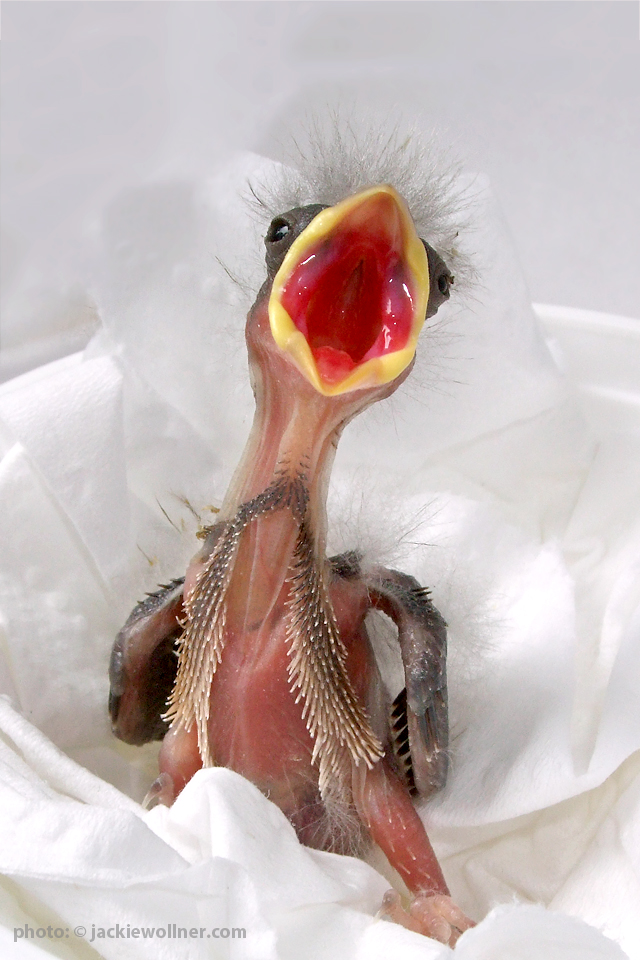 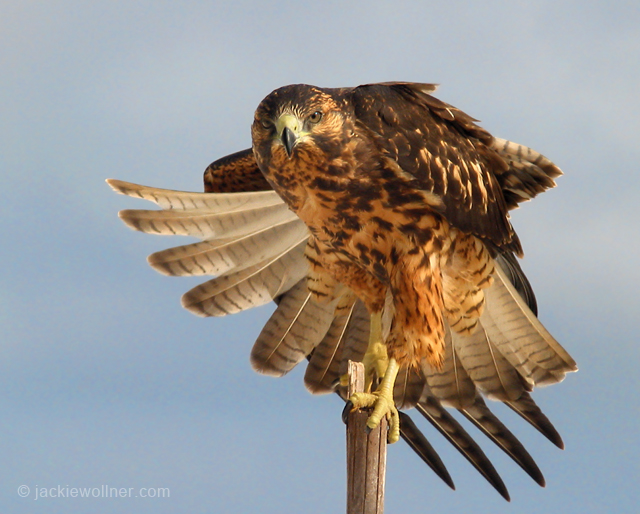 Like all the creatures in the Galapagos, this hawk had no fear of humans. It was perched on a pole near a beach on Espanola Island. The light was incredible — a bright, soft overcast. And that bird kept staring right at me, or at my camera, which was even better. Then it started stretching. The result was an unusual asymmetrical pose with that fantastic, direct eye contact. I took that shot with an early point-and-shoot camera, by the way. It was 2001 and digital SLRs didn’t exist yet.

Another favorite is the shot of the nestling House Finch stretching to its fullest and begging for food (above). It’s a favorite because I have cared for a lot of baby finches and my heart always leaps a little when I look at it. That was taken with a more current point-and-shoot camera. 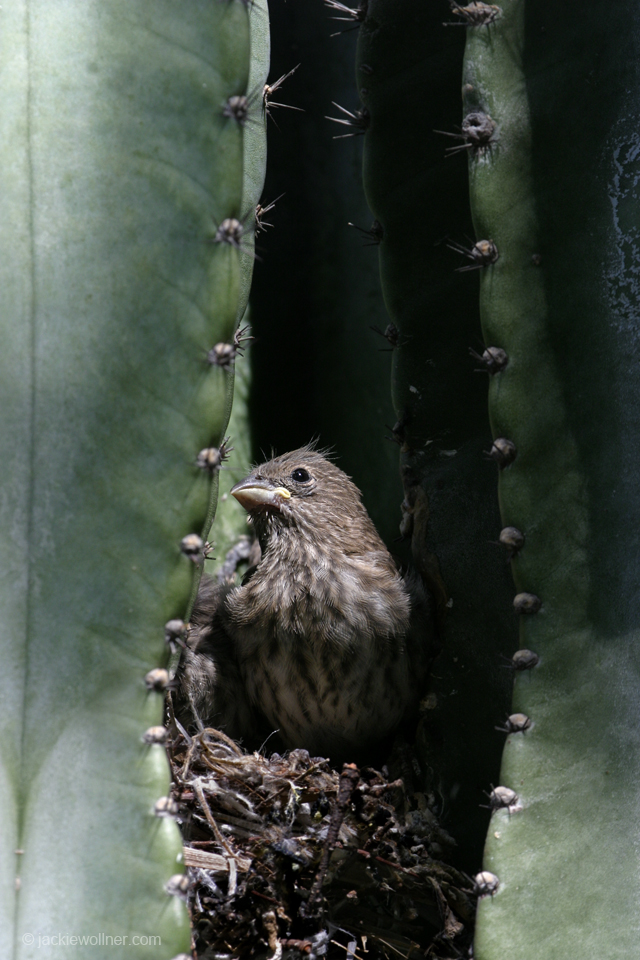 House Finch fledgling in my front yard. I love the way it is looking up at the sky. It fledged the next morning. 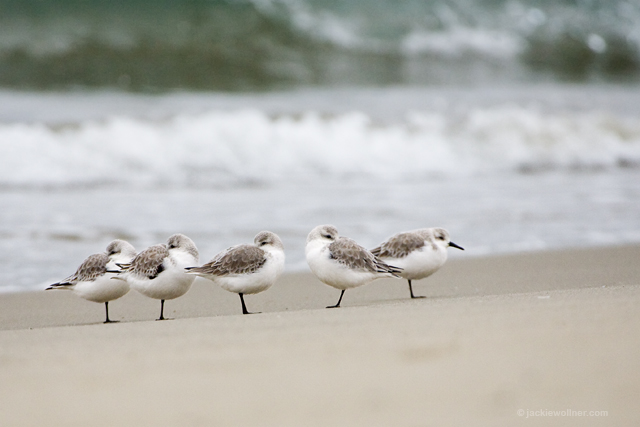 Sanderlings at Malibu Lagoon State Beach, Calif. Sanderlings are usually running in and out of the surf. But every now and then they pause for very brief “micro naps.” 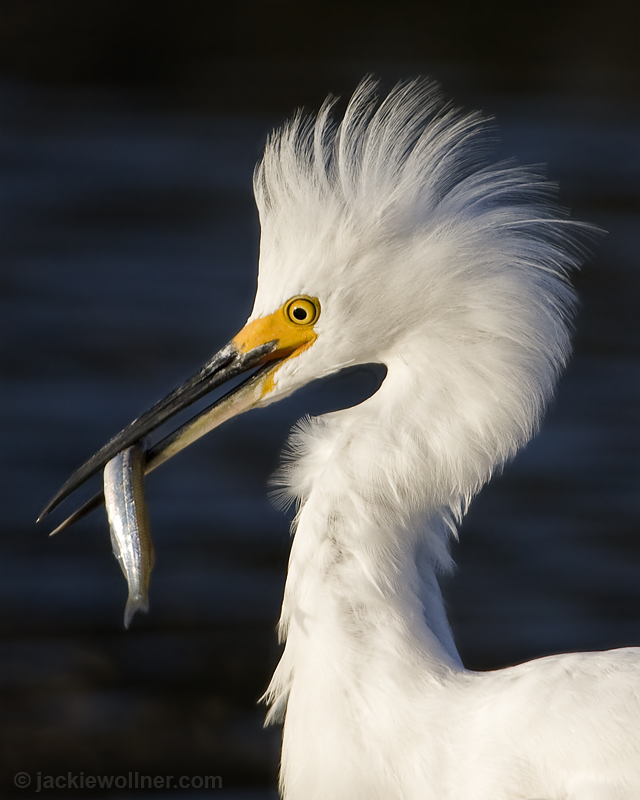 Snowy Egret with catch, Malibu Lagoon State Beach, Calif. White birds in bright sunlight are challenging to expose properly. I usually set exposure compensation to -2/3 stop or thereabouts. Newer cameras with smarter sensors may do a better job without adjustment. 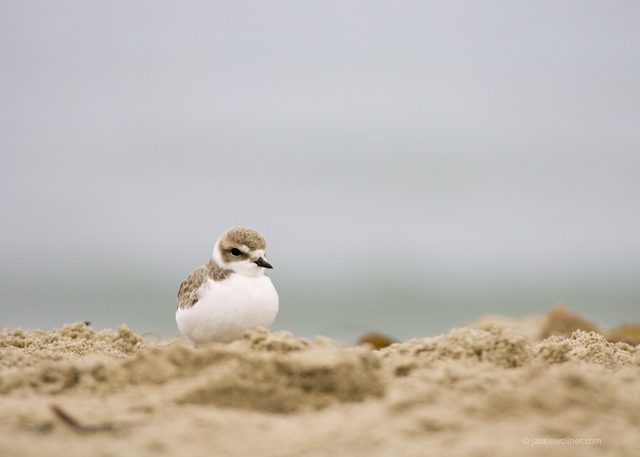 Snowy Plover, Malibu State Beach, Calif. This was taken on an overcast misty morning. It’s challenging to shoot fast moving subjects in lower light. But I actually prefer soft overcast like this to bright sunlight. 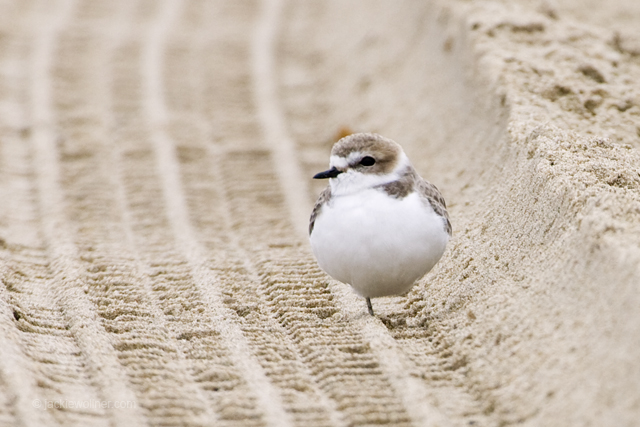 Another Snowy Plover at Malibu State Beach. These birds are listed as threatened. I find them so delicate and charming. The deep tire tracks illustrate the challenge they face from loss of habitat.

I have a particular fondness for corvids, especially crows and ravens. I’m not goth, or into Brandon Lee, or a witch, or anything like that. I just think they are the smartest, coolest creatures on two wings. I’ve worked with them in rehab settings, and I think every corvid rehabber will tell you this — when you look at them, there is definitely some “one” looking back. It doesn’t surprise me at all that they figure so prominently in mythology.

In the field, if I’m surrounded by a variety of shorebirds, I usually find myself photo-stalking the oystercatchers. Those eyes are like egg yolks! They have those big garish red-orange bills. And their legs are the pale pink color of the tights I wore in ballet class as a child. Snowy Plovers are also a favorite photo subject. There is something so gentle and fragile about them.

Ultimately I love all birds. I get all mushy emotional just thinking about all the birdy lives I’ve lost and saved. For me, bird rehab is a crushing and extraordinarily rewarding avocation. 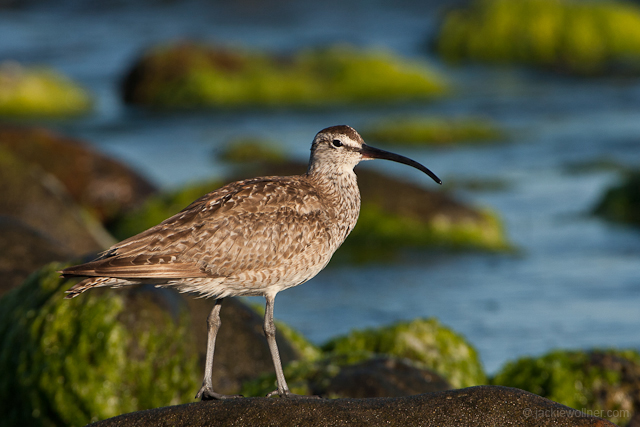 Whimbrel, Malibu State Beach, Calif. This shot was taken in late afternoon “golden hour” light. It was low tide which is a double bonus. Shorebirds are active at low tide and the exposed rock and algae bring a lot of rich color to the shot.

And check out some of our previous featured photographers, including Matt Bryant of Florida, Robyn Carter of New Zealand and Christopher Taylor of Venice, Calif.