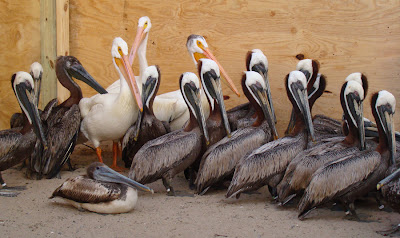 Hi everyone. We are very busy here in Louisiana at the gulf oil spill, but doing well. We are washing the very oiled pelicans and other birds that you have seen on TV and most of them are doing very well. More on that aspect of our work later. I want to address a few issues that have come up in the media recently. First of all, let me say that this is the time during an oil spill that the skeptics come out. These “experts” are quoted and their opinions, no matter how ill researched or biased they are, become controversial and newsworthy. I spent much time during the Exxon Valdez oil spill, 21 years ago, and in every other oil spill since then addressing them and I now just consider this a part of the politics of an oil spill.

For those who are concerned about the survival rates of oiled birds, based on recent news coverage (or the outdated studies they cite), I’d like to address the topic head-on. I am writing from personal experience, as a veteran of more than 200 oil spills, and as a representative of one of the foremost oiled bird rescue and research organizations in the world. IBRRC and Tri-State Bird Rescue–who is leading the Gulf response effort–host a bi-annual conference on the Effects of Oil on Wildlife, and, as such, are well versed in the latest science. The “experts” that I am referring to rarely, if ever, attend this global forum for oiled wildlife professionals, nor do they attempt to learn about advancements and successes in oiled wildlife rehabilitation.

How well do birds survive in the wild when they have been oiled and rehabilitated?

Recent studies (a few of which are listed below) indicate that birds can be successfully rehabilitated and returned to the wild, where many survive for years and breed.

The papers cited by opponents of oiled bird rehabilitation—like Oregon’s biologist Brian Sharp’s infamous 1996 report “Post Release Survival of Oiled, Cleaned Seabirds in North America” Ibis. Vol. 138:222-228—tend to rely on anecdotal band returns (meaning there is no daily tracking method for individuals released and no control groups observed.) These surveys are misleading because they fail to consider some important variables: the protocols used to care for the birds in question, the experience of the organization caring for the oiled birds and basic things like how the bird’s health and water proofing were assessed prior to release.

Simply put, one would not lump together the survival rates of human patients receiving emergency trauma care between two hospitals like Mogadishu’s Madina Hospital and New York’s Bellevue Hospital. Yet surveys like Sharp’s do just that, they lump together released birds treated at various centers, under different conditions, with different resources and experience levels. 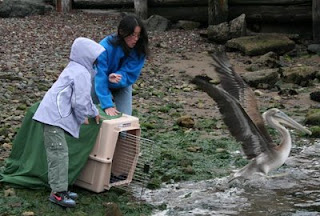 These studies indicate that many seabirds do survive the oiling and rehabilitation process successfully returning to their wild condition. And in some cases (when birds are located and observed in breeding colonies) have been shown to breed successfully for many years following their oiling, rehabilitation and release. These studies show that a bird’s survival is often based on how a specific species can cope with the stress of the entire process from oiling to rehabilitation, and that their overall survivorship across species is far greater than Sharp’s assertions. As survivorship may be correlated to individual species it is irresponsible to draw conclusions of survivability from one species to another, rather, in depth studies must be conducted for each species considered if we are to begin to answer this question with any measure of reliability.

In regards to pelicans specifically, IBRRC works year-round with brown pelicans at our two rescue centers in California, treating, on average, 500 injured, sick and oiled pelicans every year. Our release rate on these animals is 80% or higher for general rehabilitation. Pelicans, like penguins, can tolerate the stress of rehabilitation much better than birds like loons and murres for example. All of our birds (including pelicans) are federally tagged upon release. Sightings and band recoveries indicate that a high percentage of them survive. One recent example was a brown pelican, oiled and rehabilitated, during the American Trader spill in 1990 in Southern California. This bird was sighted still alive in Newport Beach earlier this year, 20 years on, and is considered one of the oldest brown pelicans ever recorded.

While this is just one bird it is a good example of the type of band returns we see from oiled and non-oiled pelicans. Of course it’s important to also remember that it is these individual birds that make up populations. At the ‘New Carissa’ oil spill in Oregon in 1999, the snowy plover population in Coos Bay was 30-45 birds. We captured 31 and rehabilitated all of them. They are an intensely studied bird and each one is considered valuable to the species. Studies of the birds showed that there was no difference in the mortality of these previously oiled birds to those never oiled.

What gives IBRRC, and Tri-State Bird Rescue, the best chance to make a difference to threatened species during oil spills is the year-round dedication to saving individual lives that has been at the heart of our mission for nearly 40 years. This approach has helped us to develop teams of trained animal care and oiled wildlife professionals that understand the intricacies of this specific field of rehabilitation and continually strive to improve our techniques as well as build a more comprehensive scientific picture of our work over time.