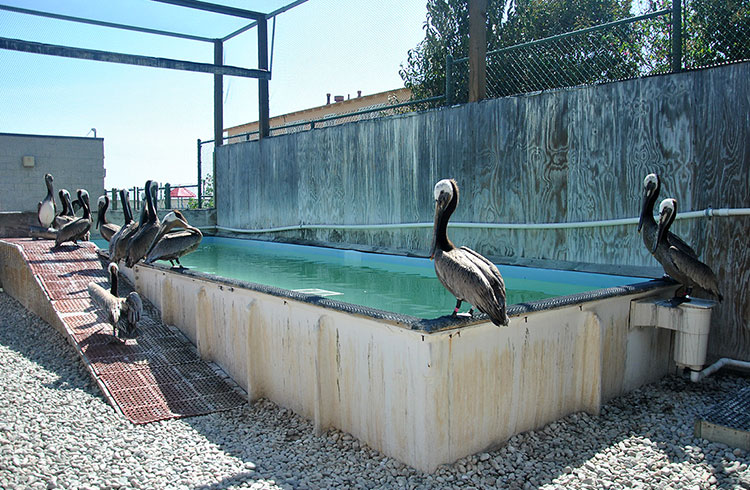 Ray of Hope In A Sea Of Dread: Washed,
Clean Brown Pelicans in Outdoor Aviary

Two weeks after oiled seabirds from the Refugio Oil Incident began arriving into our San Pedro Center, many have been washed and are now recuperating in two large outside bird aviaries.

Most of the birds in care are California Brown Pelicans. These are majestic birds with a height of more than 4 feet, weighing upwards of 11 pounds (5000 g) and with a wingspan 6+ feet.

At least 40 Brown Pelicans are in care and upwards of 36 have been washed of the oil that coated their wings after a pipeline burst at Refugio State Beach on May 19th.

Other bird species in care include Western Gulls, Western Grebes, Common Murres, a Surf Scoter, and a Pacific Loon.

Oil has severe and delirious effect on a bird’s feathers. It mats feathers & separates the tiny barbs impairing waterproofing, exposing birds to temperature extremes. In this emergency situation, the bird will focus on preening (cleaning feathers) – overriding all other natural behaviors, including evading predators and feeding, making the bird vulnerable to secondary health problems such as severe weight loss, anemia and dehydration. See: How Oil Affects Birds

A 24-inch underground pipeline burst about 20 miles NW of Santa Barbara. At least 100,000 gallons of crude oil leaked from the broken pipe, including an estimated 21,000 gallons that washed into a storm drain and flowed out to the Pacific Ocean.

As a member of California’s Oiled Wildlife Care Network our wildlife responders were activated to help with search and collection and treatment and washing of affected seabirds. Our center in San Pedro near the Los Angeles Harbor is fully staffed with multiple washing stations and two aviaries – one that is large flight aviary.

Animal numbers are updated each day and available on the OWCN blog: http://www.vetmed.ucdavis.edu/owcn/