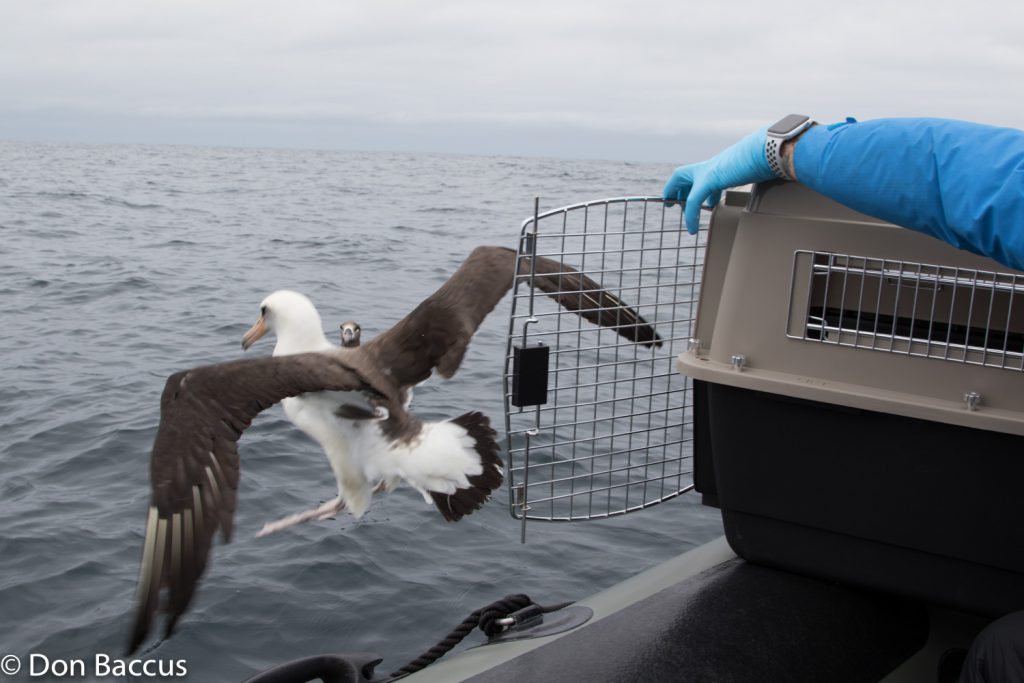 The wayward Laysan Albatross that was found grounded in a meadow in Soquel, CA, is back in the wild after being released back to Monterey Bay. Thanks to the SPCA for Monterey County for doing the original rescue back in late March after local birders alerted the animal rescue group. After being transferred to International Bird Rescue, the albatross made an excellent recovery after two weeks in care. 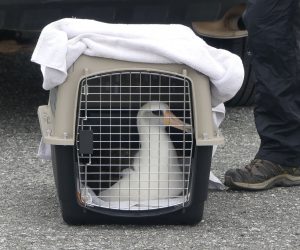 Executive Director JD Bergeron transported the bird from our wildlife center in Fairfield to the Moss Landing Harbor. Big thanks to Fast Raft who donated their services to help transport the bird 10 miles off the coast. Bird lover and friend of Bird Rescue Jan Loomis was also helpful in arranging the trip. This trip out into the open ocean was a rare moment during the current pandemic and the small group involved were blessed with views of many seabirds, a few humpback whales, and a pod of orcas.

The bird’s release was dedicated to the late Shirley Doell who was one of the count leaders during the annual nesting albatross count on Midway Atoll. Bergeron met Doell several years ago when he volunteered to help count 600,000 nests on these northern Pacific Ocean islands.

With their tremendous 6½ foot wingspan, Laysan Albatross (Phoebastria immutabilis) can take advantage of prevailing winds to glide long distances – sometimes 300-400+ miles in one day. They breed on tiny islands in the North Pacific Ocean – especially Midway Atoll – about 3,000 miles from California.

The oldest known banded wild bird in the world is a Laysan Albatross named Wisdom. At 69 years old, Wisdom returns most years to Midway to renew her nest and hatch a chick – as she did again in December of 2018 but took a year off in 2019. To date she is believed to have hatched more than 40 chicks over the course of her life.

In the past, Laysan Albatrosses notably have been found as stowaways on container ships that travel the ocean highways. They have often been spotted resting or even building nests aboard these vessels. In recent years, we’ve also seen them picked up after crash landing in the Southern California desert. Read more

Bird Rescue relies on the generous support of the public to care for wildlife, including wayward birds blown off course, those injured in cruelty incidents, as well as those harmed by fishing gear and other human-caused injuries. Please donate

1 thought on “Release Files: Laysan Albatross Returns To The Wild”