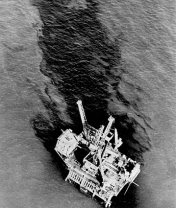 “Today marks the 40th anniversary of the Santa Barbara oil spill. On Jan. 28, 1969, a blowout on a Unocal rig six miles off the coast of California spilled 3 million gallons of oil into the ocean. Oil spoiled 35 miles of coastline from Rincon Point to Goleta and tarred Anacapa, Santa Cruz, Santa Rosa and San Miguel islands. The blackened corpses of oil-soaked birds, seals and dolphins washed up on our beaches. Citizens were outraged, and the modern environmental movement was born.

Although we have come a long way since that tragic day, recent events indicate that some have forgotten history. At this critical time, we must remember that the choices we make today will decide whether our shoreline and coastal oceans are exploited or protected for years to come. This is especially true for Santa Barbara. Drilling off the Santa Barbara coastline carries with it the same significance as a violation of the Arctic National Wildlife Refuge.

In 2008, the “Drill Here, Drill Now” crowd caused a dramatic shift in offshore oil drilling policy. In July 2008, former President Bush repealed the Executive Order imposed by his father in 1990. In September 2008, Congress didn’t renew the moratorium on drilling for oil and gas on the outer continental shelf, opening up federal waters off the California coast for drilling for the first time since the 1981 moratorium…” Full opinion column here