Our friends at the Southern African Foundation for the Conservation of Coastal Birds (SANCCOB) have an update on oiled African Penguins near Cape Town. Dozens have been recovered after SELI 1, a freighter wreck near Robben Island, broke into three pieces in severe weather, causing an oil slick.

The Panamanian-registered, Turkish-operated ship was carrying 30,000 tons of coal and 600 tons of heavy fuel when it developed engine problems in 2009. It has remained stranded since then.

SANCCOB has been on high alert since the SELI 1 caused a major oil slick on Saturday, 1 September 2012. A total of 40 oiled endangered African penguins have been collected from Robben Island since Sunday. Two penguin chicks were also admitted due to one of their parents being oiled. The oil slick was drifting in Table Bay, which is the main feeding ground for seabirds from Robben Island and the West Coast National Park.

The Earthwatch team currently working on Robben Island has done an outstanding job in capturing the oiled penguins. The oiled birds are usually captured on the beach as they come out of the ocean from their foraging trips. The birds are then boxed and transported to the Waterfront where SANCCOB collects them for transport to their rehabilitation centre in Table View, Cape Town. Nicky Stander, SANCCOB’s Rehabilitation manager said, “The birds are currently being stabilized, which includes hydrating and feeding the birds, before they will be strong enough to go through the stressful washing process. Dedicated staff and volunteers will start to wash the first group of birds tomorrow.”

The ongoing pollution from the SELI 1 wreck is a major concern for SANCCOB. The relatively small number of birds affected is not an accurate indication of the overall impact of the spill on the marine environment. The marine biodiversity is already under threat, especially for our penguins. In 2010, African penguin species was reclassified as Endangered on the IUCN Red Data List and the wreck poses a high risk to the breeding colony on Robben Island. (Read more at SANCCOB’s website.)

The SELI 1 oil slick is near the site of an environmental catastrophe: On June 23, 2000, the damaged bulk ore carrier MV Treasure sank off the coast between Dassen and Robben islands, which respectively support the largest and third-largest colonies of African Penguins worldwide.

Within 10 days of the Treasure Spill, 20,251 oiled African penguins had been admitted into the rehabilitation center in Cape Town. The International Fund for Animal Welfare (IFAW) funded a major portion of the rehabilitation effort, bringing in the International Bird Rescue response team and many other supervisors from around the country. SANCCOB worked in unison with the international team to provide care for the oiled birds.

By late August, more than 18,000 oiled African Penguins had been rehabilitated and released — 90% of all the oiled birds captured. Of the 20,251 brought in for care, 1,957 died or were euthanized. The rehabilitation effort lasted more than 12 weeks. 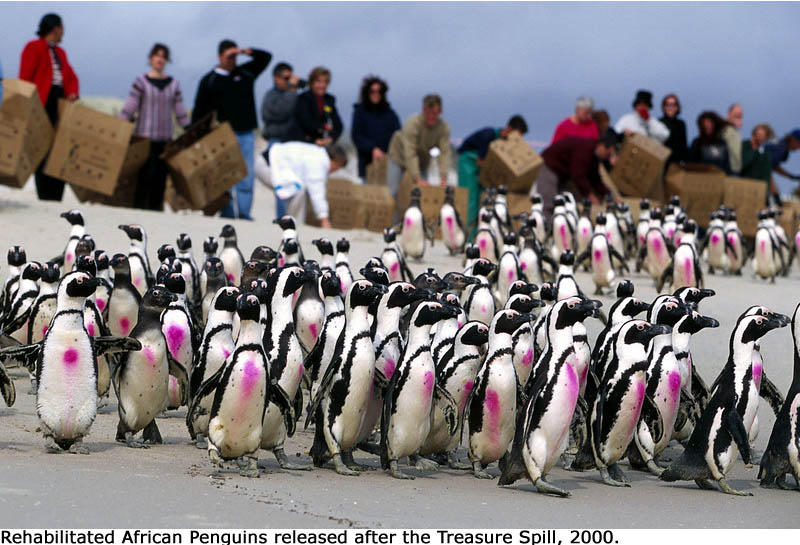