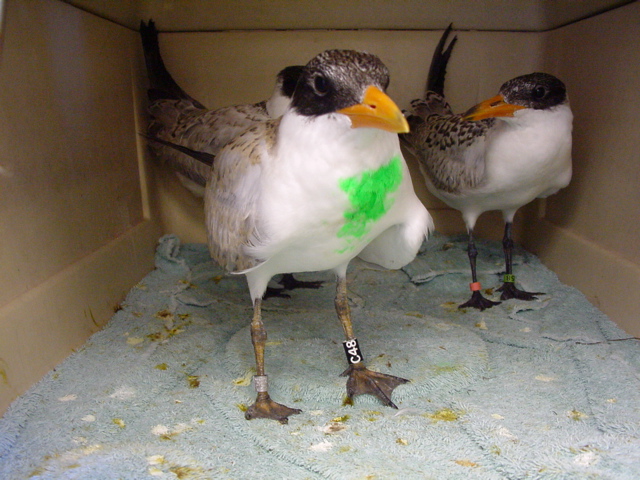 A Caspian Tern, a sensitive seabird rescued after hundreds of Tern chicks were tragically hosed off of two barges and into the Long Beach Harbor for a Fourth of July fireworks display in 2006, went on to survive in the wild for six years. The Tern, one of 25 birds that survived to be rescued and rehabilitated by International Bird Rescue, was released at the Salton Sea in August of 2006 and recently brought to Wetlands & Wildlife in Huntington Beach with a broken wing, highlighting the value of bird rehabilitation efforts in such situations.

“This news is bittersweet,” commented Jay Holcomb, Director Emeritus of International Bird Rescue. “The injured Tern had to be humanely euthanized due to the severity of its wing injury, but its discovery is extremely important evidence that the rehabilitation and rearing of sensitive species such as Terns works. We are delighted that this bird had six years of life in the wild and its survival implies that other chicks could have made it, as they all had the same opportunities. We hope it bred and reproduced, but we will never know.”

Hundreds of Caspian and Elegant Terns perished in the 2006 incident prompting an investigation by the California Department of Fish and Game. In 2008, the company involved was found guilty of cruelty and was given a $15,000 fine. However, International Bird Rescue never received any compensation for the cost of rehabilitating the chicks and collecting and storing the dead birds for evidence.

“The odds were against these chicks when we received them,” says Holcomb. “They were wet, cold and required care from their parents. We had to raise them in the best way we could, basically becoming their parents; helping them to learn to hunt for fish on their own. It was not an easy task!” The decision was made to release the Caspian Tern chicks at the Salton Sea where there are large Tern colonies and fish are plentiful to increase the odds for these young birds who had just learned to hunt for themselves.

“The long-term survival of this Tern illustrates the effectiveness of wildlife rehabilitation,” says Paul Kelway, Executive Director of International Bird Rescue. “Experienced wildlife rehabilitators can be an important last line of defense when animals face human-caused tragedies like the hundreds of dead and injured baby Terns littering the beach in 2006. We have a duty to respond in such situations and with the right knowledge and expertise it can be done successfully.”

International Bird Rescue is hoping for fun, safe and cruelty-free Fourth of July celebrations this year.