By Rebecca Duerr and Suzie Kosina

Allow us to take you back in time a little more than a decade. The beginning of 2010 was not a good time for California Brown Pelicans. As rough winter weather pounded the west coast, it hampered the seabird’s ability to forage for food. Only a few months earlier, in November 2009, they had just been removed from protection as an Endangered Species. During a normal year, most breeding age pelicans should have already been south in Mexico raising the next generation. Instead, hundreds of starving Brown Pelicans began showing up along the California coast. On harbor jetties and breakwaters, mature adult pelicans, sadly beautiful in their gorgeous breeding plumage, lay dead and dying.

Suddenly, both of International Bird Rescue’s California wildlife clinics had unprecedented numbers of Brown Pelican admissions, with as many as 54 new patients arriving daily. Our Los Angeles Wildlife Center was so overcrowded with pelicans that Bird Rescue diverted pelicans from Santa Barbara to our San Francisco Bay-Delta Wildlife Center. Between December 2009 and the end of March 2010, our centers received 641 Brown Pelicans in need of help.

The pelicans that arrived were cold, wet, and starving, with severe emaciation, anemia, and dehydration as prevalent findings. Many of them had poorly waterproofed plumage for no obvious reason. The California Department of Fish and Wildlife ran tests on feather samples to rule out contamination with a foreign substance as the cause of the mass stranding event, but nothing was found. It was a mystery. 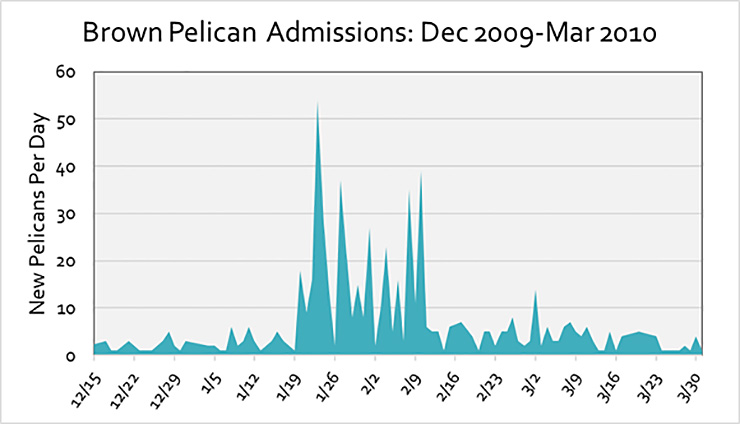 One of these patients, a sub-adult male, had been stranded in Monterey, CA. He was rescued on January 29, 2010. He spent several days with our colleagues at the SPCA for Monterey County being stabilized with other stranded pelicans before being transferred to our Northern California center. Like many of the other birds, he was severely emaciated at only 3000g, anemic, and had trouble thermoregulating. Every indication suggested he had not been successfully foraging for food and had little time left before he would have succumbed to the elements – becoming one of the less fortunate dead birds on a beach or jetty had he not been rescued.

Bird Rescue provided a warm environment because his body was so weak it had lost the ability to effectively thermoregulate. Fluid therapy was given to correct dehydration, and food was carefully reintroduced to help his weak system absorb much needed nutrients.

After several days of critical care, he began thermoregulating again and could be introduced to outdoor temperatures. He started eating on his own, and was advanced to an outside conditioning aviary and pool for exercise and building back plenty of muscle mass before release.

On his last day in care, one of our clinic staff gave him a checkup. His muscles were now palpable over his bones, and his demeanor had returned to that of a feisty wild animal. He had successfully gained 1600g during care – which showed us that he was admitted at only 65% of his normal body weight, which is the equivalent of a 150 lb person who has starved until they only weigh 98 lb. Thankfully, pelicans are very resilient birds.

Before his release, a thick bright blue band, with the identification tag of A93, was placed around his left leg, along with a metal identification tag on the right leg. He was set free at the Berkeley Marina in late February, 2010. The ocean he returned to was the same one he was rescued from a few weeks earlier. Nothing we can do about poor ocean conditions or a lack of fish in the sea. The rest of his journey was up to him.

In 2018, he was spotted for the first time since release flying over a small island off the coast of Point Lobos State Reserve in Monterey County. He landed among other roosting Brown Pelicans and cormorants. He appeared to be looking right into Kira Gunderson’s camera lens as she took his photograph.

Pelican A93’s plumage was neat and tidy and his pouch was building up a spectacular bright orange color that signals breeding times. He looked healthy, but he was far from the breeding grounds in southern California’s Channel Islands and the warmer waters of Mexico’s Baja California. Would he make it there? For that year, it was unknown. For that matter, what had he been doing all this time while unobserved?

Back in the winter 2010 we successfully released 410 of the 641 pelicans from the mass stranding event. However, only 99 were fitted with blue bands due to a shortage of bands at the time. Brown Pelican colonies have not been well-monitored until relatively recently; nonetheless, there are monitoring efforts in both countries nowadays but it is difficult to cover all nests and regions. Plus, hundreds of people who love to watch pelicans flying on our coast keep an eye out for our blue bands. Even so, our former patients often manage to evade being re-sighted for a few years at a time, but this bird had one of the longer intervals in our records. Eight years is long enough that we start to worry the bird has died or lost their band.

Good news arrived this month in the form of a photo taken by Jim Howard, the lead seabird biologist for California Institute of Environmental Studies. He shared with us a picture of a healthy adult male pelican sporting blue band A93 preening next to a nest with two fluffy chicks on the Channel Islands. Of course, we are ecstatic whenever we receive reports of our former patients doing well in the wild, but having solid evidence of them succeeding as breeding members of their species is even better. Breeding means our former patients are leading truly successful lives and contributing to the future of their species. It makes all the hard work of giving these animals second chances well worth it.

And more good news: Earlier this year, two additional Brown Pelicans sporting Bird Rescue’s blue bands were spotted on the Channel Islands — among, though not definitively associated with — nests: Pelican A06, another bird released during the same winter 2010 mass stranding event, and pelican E15, a bird that was treated later in 2010 for a fishing gear injury.

All three of these long-surviving birds give us great hope for the future of Brown Pelicans; but really, we can’t wait to see baby pics!