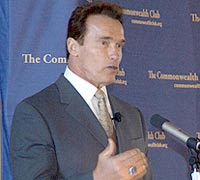 Schwarzenegger remembers walking the beach in his Santa Monica bodybuilding days after the Santa Barbara oil spill: “Every single time I walked around Muscle Beach, my feet were stuck with tar and there were dead birds laying around,” Schwarzenegger told the Commonwealth Club in San Francisco this week. “I think the people of California don’t want to go through that again. I think we must protect our pristine coastline.”

Schwarzenegger’s opposition to additional offshore drilling puts him at odds with other Republicans, including presidential candidate John McCain. McCain continues to make offshore oil drilling a major component of his energy platform. He touts the “drill here, drill now” mantra during campaign stops outside California.

Memories of the January 29, 1969 spill are still fresh in this state. The oil spill happened when a Union Oil Co. platform blew out six miles off the coast of Summerland. For eleven days, as 200,000 gallons spewed out of the well, oil workers struggled to cap the rupture. Blown by winds and swells the oil created a 800 square mile slick.

At the time, Fred L. Hartley, president of Union Oil uttered these insensitive words: “I don’t like to call it a disaster,” because there has been no loss of human life; I am amazed at the publicity for the loss of a few birds.”

Following the spill, Earth Day was born nationwide. Many people consider the oil spill a major impetus to the modern environmental movement.