Skip to content
Home | Blog | Signs of hope: Pelicans released back to the wild 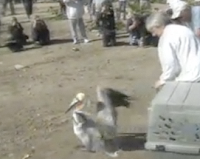 More than a dozen pelicans were released in San Pedro on Wednesday afternoon. The birds were found sick or injured, and nursed back to health at our bird center near Los Angeles Harbor.

Staffers and volunteers at IBRRC released 14 pelicans that had been nursed back to health. They were set free at Royal Palms State Beach in San Pedro after 10 days of blood tests, treatment and food.

Hundreds of Brown Pelicans have been found wet, sick and dying along the California coast since early January when El Nino like storms lashed the state with severe rain and flooding. IBRRC has been appealing to the public to help with the high cost of caring for these birds.