Skip to content
Home | Blog | Sometimes It Takes a Village: Relying on the Kindness of Strangers 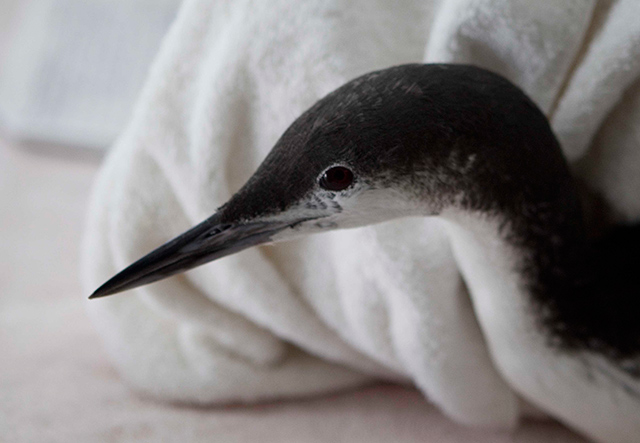 It may be hard to believe, but we have actually had injured birds come to us, like a gull that once landed on the roof of our Los Angeles center impaled by a gigantic, three-pronged fishing lure. But the majority of the time, injured and sick birds rely on caring humans to get from where they land or beach themselves to our bird hospitals. There can be stops at other centers along the way for assessment and triage, but because most wildlife care centers in California don’t have the large pools and aviaries needed to properly rehabilitate many aquatic species, they need to get to International Bird Rescue. It is not uncommon for patients to come from hundreds of miles away to get the specialized care our centers provide.

Since they can’t fly or drive themselves, these birds need the equivalent of a bird limo service. We call this volunteer program Wings on Wheels — caring humans willing to drive long distances with a bird companion. If only they counted for the carpool lane!

When a Pacific Loon flew into a lighthouse during a storm in a remote area of Mendocino County (130 miles north of San Francisco), it could have been the end of the line for the beautiful bird. But this loon had luck on her side and a strong will to live. The Point Arena Lighthouse is a historical landmark with an animal-loving manager, Pamela Fitzgerald, who saw the grounded black bird with the beady eyes and razor-sharp bill and was not deterred. She thought the bird was injured because it couldn’t move. One wing appeared to have a slight droop.

Many people don’t know that some water birds can’t walk on land. Physiologically, they’ve evolved to dive, so their legs are far back on their bodies. When they become grounded, it’s commonly assumed that they’re injured, but uninjured grounded birds just need to be put back into water. In this case, it would be impossible to know if this loon was injured without examination by a professional. 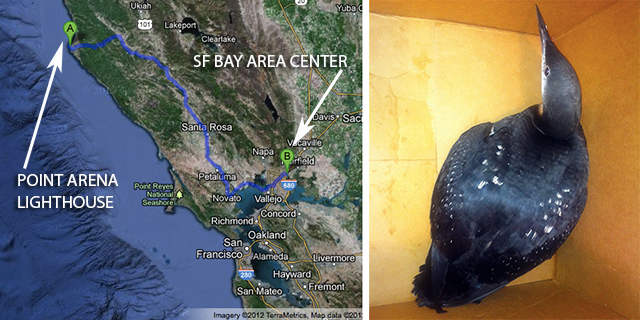 Pam did the absolute right thing — she contacted IBR for instructions, and with the help of gloves and a blanket, the loon was gently put into a box. Since it was late in the day, nothing could be done except to let the loon rest for the night and find a bird limo driver to get her from the lighthouse to our San Francisco Bay Area center in Fairfield — a long and winding 140-mile drive on mostly back roads.

To everyone’s relief, a quick look in the box the next morning found the loon alive. Loons, like many wild animals, can actually die from the stress of capture and confinement, so keeping them in a quiet dark box is the best one can do. Getting the loon to our Bay Area center was another matter. Becky Curtis, who works at the lighthouse, generously offered to make the journey across four counties. And because of the stress factor, her feathered friend would need quiet — no rock music on the drive.

Arriving at IBR late in the evening, the loon was quickly examined and hydrated by intern Sierra Lammers. Since the loon’s waterproofing had been compromised, which can happen if the bird’s feces have stuck to its feathers while in the box, she was put on a comfy donut in a net-bottomed cage to rest the night.

The next morning, an exam by rehab manager Michelle Bellizzi and veterinarian Dr. Rebecca Duerr revealed no broken bones, just the equivalent of a bump and a bruise from crashing into the lighthouse. More fluids and nutrition via a tube, time in a warm-water pool for some feather cleaning and rearranging, and then a warm dryer had this loon at maximum feistiness. Loons are difficult to rehab because they truly hate confinement, so staff wanted as short a stay as possible. Blood work showed that this loon was ready for her silver band, hospital discharge papers and another journey — this time the last — to her ocean home.

A shout-out was made for a volunteer, and within moments, Jeff Robinson e-mailed back his eagerness to do a loon release. The loon went back in a box for another long, quiet car ride, this time to Fort Baker near the Golden Gate Bridge. After logging a couple hundred miles and being helped by many caring humans, this feisty girl was released under the bridge where she could easily swim to her natural home — the Pacific Ocean. May you find lots of fish and stay away from lighthouses. —Karen Benzel

This loon has been adopted as part of International Bird Rescue’s Adopt-a-Bird Program. If you would like to adopt a loon or another species we care for, please visit our adoptions page for more information. Adoptions make unique and meaningful gifts and memorials for loved ones and family.

To sign up for IBR’s Northern California Wings on Wheels program, please e-mail us and we’ll get you on our list.

1 thought on “Sometimes It Takes a Village: Relying on the Kindness of Strangers”