A Brown Pelican in Alameda, CA that was stuck in the mud and tethered to discarded fishing tackle is alive today and in care at International Bird Rescue after a heartwarming community rescue effort. 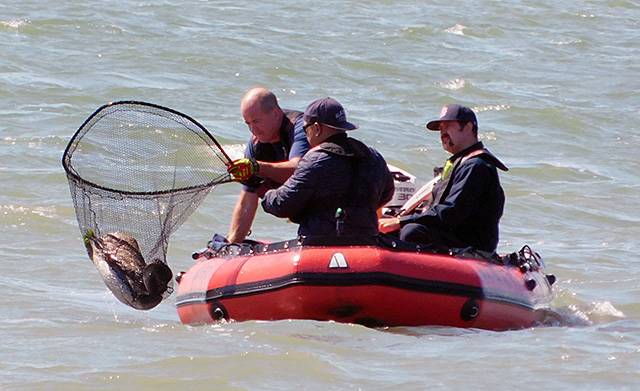 On June 23th a newly retired Lincoln Middle School teacher, Sharmaine Moody, noticed a Brown Pelican that appeared to be stuck in the offshore mudflat between the Elsie Roemer Bird Sanctuary and the Bay Farm Bridge during low tide. As it struggled to get airborne, other pelicans became alarmed and kept circling in the air over the young bird. Eventually the other pelicans left to forage elsewhere, but Sharmaine kept returning to monitor the stranded pelican at different tidal conditions to try to ensure there would be a chance for a boat rescue to work in a higher tide.

A call was made to the Alameda Fire Department for help rescuing this pelican in peril. When Battalion Chief David Buckley was confident there was sufficient fire coverage in town on June 24th, he deployed Alameda’s Rescue Boat 01 crew, manned by firefighters Ty, Roland, & Nick. As soon as their Zodiac approached the pelican, they realized how stranded this poor bird was. When they tried to lift the pelican with a net, they felt the tug of the entanglement beneath it, preventing them from getting the bird out of the water. An assortment of fishing gear, including wads of monofilament line, had to be cut off before they were able to bring the pelican up into the rescue craft. Back at the boat launch, even more fishing gear had to be cut away to get the pelican out of the net.

With the help of Sharmaine Moody and former Bird Rescue volunteer, Linda Vallee, the injured pelican was quickly transported to our San Francisco Bay-Delta Wildlife Center in Fairfield for emergency veterinary care. The young Brown Pelican is currently in serious but stable condition. It suffered severe constriction wounds to its leg and damage to its wings from the fishing line entanglement that will require many weeks in care to heal.

Special thanks are due to the Alameda Fire Department for their rescue heroics last week, as well as to Sharmaine Moody and Linda Vallee for keeping track of the pelican’s predicament until a rescue could be arranged. It truly takes a community to protect our natural world and the wildlife we share it with.

This case is not only a strong reminder of the needless suffering and bodily harm that stray fishing gear and monofilament fishing line can cause for wildlife, but also the positive impact individuals can have when they take action on behalf of animals in need.

There are simple actions everyone can take to help prevent needless suffering for wildlife, including birds and marine mammals, and also reduce entrapment risks for swimmers in local shorelines, too. We encourage all fishermen to remove all their gear from the water and shoreline.

If you come across any discarded fishing line, make sure that it gets deposited into a proper receptacle. Alameda, and many other fishing locations throughout California have specialized bins for recycling monofilament, which are part of the national Reel In & Recycle Program.  When specialty receptacles aren’t available, you can cut the monofilament into small pieces and dispose of it in a lidded trash container. If you would like your local park or pier to implement a fishing line recycling program, contact your harbormaster or local parks department.

In recent years other bird species in nearby waters have been adversely affected by cast off fishing gear. Four Ospreys in the Alameda area have been entangled in fishing line and gear, including one confirmed to have died from its injuries.  Just last month, another local Osprey female at Alameda Point had to be trapped on her nest in order to remove an entanglement.