When our rehabilitation manager, Coleen Doucette was awakened at 3 AM on March 3, 2001, little did she know what she was getting into. The call came from the Chevron refinery in Richmond. Two really big seagulls had come in on a barge and workers couldn’t shoo them off a barge that arrived at the refinery. When Coleen and her husband arrived at the refinery in the wee hours of the morning, she knew at once these weren’t seagulls, but rare Laysan Albatross.

Coleen told them the reason they couldn’t get the pair off the boat was probably due to the fact the birds thought the barge was an island, and a good potential nesting site. The pair was whisked to the IBRRC hospital where a thorough exam and blood work revealed both of them to be in excellent health. 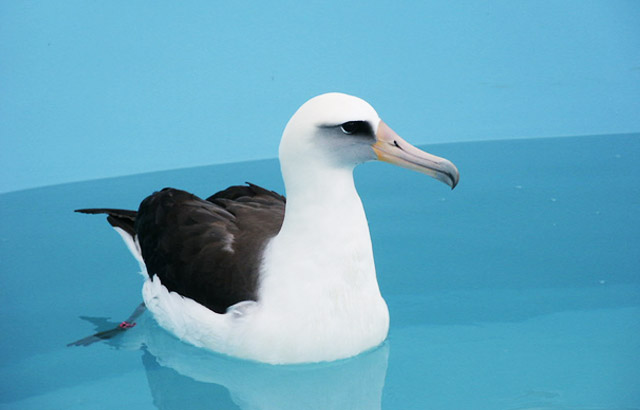 Once the media got wind of the Albatross rescue, they flocked to our center to film the gorgeous birds as they floated in their large outdoor pool. Stories about our “lost lovers” appeared in the Fairfield Reporter, the Contra Costa Times as well as getting on the Associated Press wire service and TV stations from San Jose to Sacramento.

From past experience, Director Jay Holcomb knew it was best if the pair were taken back out to sea and released, as they needed a long water runway to get airborne again. The Oceanic Society agreed to take them out on their whale watching tour boat so that they could be released without sight of land. “We want them to head back to the Hawaiian Islands to nest with other Laysan Albatross,” Jay said, “and their journey should only take them a few days.”

Read more about Albatrosses: Eye of the Albatross, Visions of Hope and Survival. By Carl Safina, New York Times