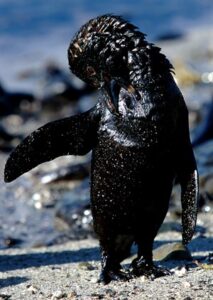 On June 23, 2000 the damaged bulk ore carrier MV Treasure sank off the coast of South Africa between Dassen and Robben islands, which support the largest and third largest colonies of African Penguins (Spheniscus demersus), worldwide. At the time, the population of African penguins was numbered at less than 180,000 and dwindling (now considered Endangered with only about 40,000*). The ship spilled over 1,300 tons of bunker oil, which immediately oiled thousands of penguins on and around the islands.

The International Bird Rescue’s response team was immediately mobilized by the International Fund for Animal Welfare (IFAW) who helped organize the rehabilitation effort of over 20,000 oiled penguins.

In addition to the rehabilitation program, there was a massive pre-emptive capture program initiated on the islands and it was successful in relocating over 19,500 non-oiled penguins. By the end of the three-month response, over 90% of the oiled birds have been rehabilitated and released.

While the number of oiled birds was staggering, the Bird Rescue response team was experienced with large scale spills effecting penguins, as they have responded to three previous spills in Cape Town, the largest of which was the Apollo Sea spill in 1994.

Six years before the Treasure spill, almost 10,000 African penguins were oiled from the sinking of the MV Apollo Sea bulk ore carrier. Of those oiled penguins, over 4,700 were rehabilitated and released. Immediately after the Apollo Sea spill, local trustees in Cape Town began a monitoring program on the nearby breeding islands of Robben and Dassen. Biologists have spent the last six years monitoring these breeding colonies and have found that seventy-five percent of the rehabilitated birds have been seen on the island and that the birds were breeding at normal mortality rates three years post spill. Read more

While these study results are very exciting, Bird Rescue continues to research the effects of oil on wildlife in an effort to provide the best achievable care for oiled animals. Our protocols have advanced greatly since 1994, as research has shown new and better ways to provide care to oiled animals. With new advancements in the field, there is strong evidence that a much higher percentage of the oiled penguins from the Treasure spill will survive to breed again.

Within ten days of the Treasure spill, 20,251 oiled African penguins had been admitted into the rehabilitation center in Cape Town. The International Fund for Animal Welfare funded a major portion of the rehabilitation effort, bringing in the IBRRC response team and many other supervisors from around the country. The local rehabilitation center, The Southern African Foundation for the Conservation of Coastal Birds (SANCCOB worked in unison with the International Team to provide care for the oiled birds.

Although this rehabilitation effort was the largest of its kind in the world, there were many factors that helped to make it so successful. After a large oil spill, it is imperative a wildlife response team is immediately mobilized, in the case of the Treasure spill, the Bird Rescue Oiled Wildlife Team was mobilized the same day the ship went down.

Our experience in managing oil spills, particularly large-scale operations has taught us what is needed in terms of facilities, human resources, equipment and supplies. It was apparent within hours of the Treasure spill that there would be thousands of birds oiled and that the team needed to prepare for the worst case scenario. A huge railway warehouse was secured for use as the rehabilitation center, over five acres of covered space was utilized to house the 20,251 African penguins. In addition to the indoor space, over six acres was used for pens and pools to house the clean birds while they were bringing up their waterproofing.

The logistics of caring for over 20,000 birds is monumental and during the twelve-week rehabilitation process, more than 130 International Team members supervised over 45,000 different volunteers. Additionally, 400 tons of fish was fed to the birds (some days as much as 10 tons), 7,000 tons of beach sand was brought in for bird pens and 302 25-liter jugs of detergent were used.

Very strict pre-release criteria were set for the African penguins in rehabilitation to ensure that when released they had the best possible chance of survival. Many of the birds that were released in Cape Town have already been seen on the islands, paired up and producing new eggs.

We have learned from the research of the University of Cape Town, Avian Demographics Unit and the Cape Nature Conservation that the rehabilitation of oiled penguins has become a necessary and vital conservation tool due to the vulnerable status of the Africa Penguin. Prior to release, each bird was given a permanent flipper band to aid in continued field research.

*The total breeding population across both South Africa and Namibia fell to a historic low of about 20,850 pairs in 2019