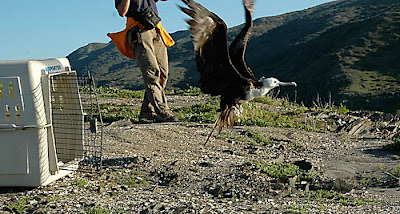 Without much fanfare, the juvenile Magnificent Frigatebird that was found in Sonoma County last month and then came to IBRRC with a lot of interest by birders and the media was successfully released Tuesday, February 5 on the cliffs at the backside of Santa Catalina Island.

Marie Travers, IBRRC’s Assistant Rehabilitation Manager at IBRRC’s Cordelia rehabilitation center said that the release, “Could not have gone any better”. Which was a relief for all who have taken care of the bird for the last month. The bird flew out of its cage and circled in the air for a long time, eventually flying away.

Why was the release so secretive? This was somewhat intentional for the sole reason that with pelagic birds such as Frigatebirds, Albatrosses and Boobies we are always cautious about how they will react when released and we have had birds crash, get confused, sit on small rocks to incubate them and so on and we have had to bring birds back to the center until they could get their bearings.

We really did not feel we could schedule a press event with the logistical challenges we had in getting the bird to Southern California, out on a boat (26 miles off the coastline) and to a spot where the winds would help it take off, in between storms and so on. We also felt that it was important to give the bird the best opportunity to get back into its intended environment (the open ocean but from land in case there was a problem) without the immediate challenge of fighting a storm or strong winds.

The warmer climate of Southern California and the lesser risk of a storm played heavily in our decision to release the bird in the best place possible for its reintroduction back into the wild. We also had to coordinate this release between oil spills and our heavy winter bird loads at both centers.

We never did discover why the bird was so skinny and weak when it was found in a tree in Sonoma. That has been a concern to us as the bird could have some ongoing issue that we don’t know about that prevented it from eating and as a rehabilitator we always look for clues as to “why” the bird was starving. Not just that it was starving. But, our staff, who I cannot praise enough, literally nursed the bird back to health and the fact that once it gained a bit of strength and then rapidly improved suggested that something had prevented the bird from eating, therefore coming in in a weak state. We have seen this with birds that had fishing hooks and line in or on them or birds that were kept in cages for long periods of time and they released but were too weak to care for themselves. Certainly something caused its starvation and we ruled out disease and other health issues after examining the bird and taking blood and fecal samples. So, it will always be a mystery as to why this bird showed up weak and confused on a tree in Sonoma. It did pass its release evaluation with means that it has perfect blood parameters, perfect waterproofing, had the ability to fly as it took short flights around its cage in Cordelia, was bright alert and aggressive (no problem there) and it had gained all its weight back. 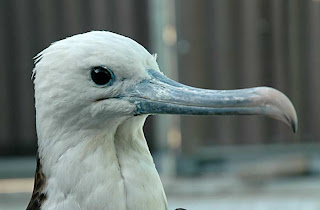 As Marie and Monte, who had cared for and forced fed the bird daily, said to me last Thursday when I returned from an oil spill in Argentina, “this bird is ready to go ” implying that it has become aggressive and was as equally done with us as our staff was with it. Often birds that are ready to return to the wild and have completed their rehabilitation let you know in not so subtle ways like biting, flying intensively and so on. So, for all intents and purposes it was back to “normal” and we made arrangements for its release.

I want to thank everyone involved in the rehabilitation of this bird, from capture to release, for your patience with us and your interest in the bird and in IBRRC. We have had an unprecedented 3 months of oil spills, heavy influx of birds due to the storms and other factors and we are already over 200 bird intakes in our center in Cordelia this year. Last year we hit that number in late March so you can see we have been busy. We are also rehabilitating over 35 oiled western grebes at our center in San Pedro as I write this. These birds are oiled from natural seep oil along the coast that was assumed stirred up by the recent storms in the area. I also must take this opportunity to say to all of you reading this that, as our Media Relations Specialist, Karen Benzel, puts it, “these birds do not come in with credit cards or a bank account”. Their care is funded by donations to IBRRC and that is the bottom line. We cannot do this work without public support.

The bird has been banded and if we ever hear back about it we will inform everyone. Lets hope we never hear from it again. We are working to keep everyone abreast of our work throughout the year, invite people on interesting releases and open the center up a bit more for visitations by birding and other groups who are interested in seeing our work and the birds close up.

I am a birder myself and I love watching the more fortunate ones in the wild but I know the value of what IBRRC brings by rehabilitating wild birds that often are here because of something a human or humans have done to cause it injury or displacement. Over 80% of our patients are victims of us, humans. I want to be honest and public about my goal of having all birders become members of IBRRC and other rehabilitation organizations in your area. For an annual basic membership of $25 you can greatly contribute to the birds that you and I enjoy watching in their natural environment and I encourage you to do this. It also gives us income that we can rely on to do this work. The Frigatebird alone cost the center over $1,500 to care for and all contributions are appreciated. Membership information