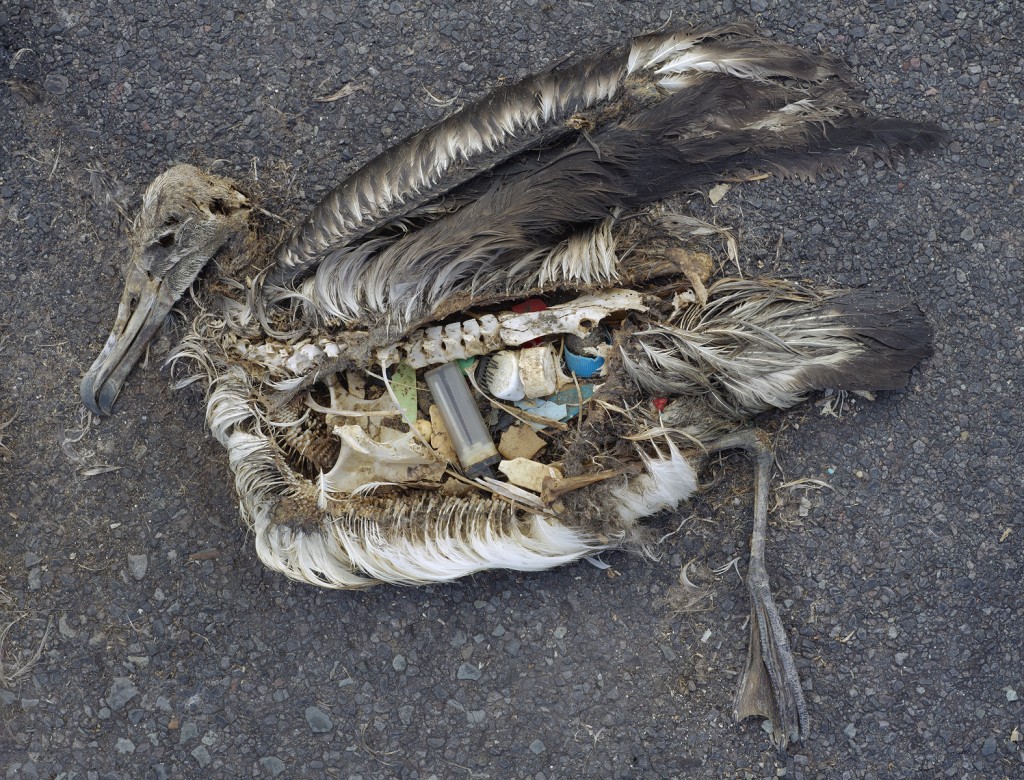 It’s a sight that one perhaps wishes to have never seen, and certainly never forgets: the carcass of a Laysan Albatross, its stomach filled with disposable lighters, chocolate wrappers, water bottle caps and other plastic debris amassed throughout the world’s oceans.

“I had to laugh out loud to keep from crying,” Victoria Sloan Jordan, an associate producer of the in-production documentary Midway, says of seeing albatross chick remains filled with plastic on the remote Midway Atoll, where more than one million albatrosses breed annually. “It was so uncomfortable and unreal. The crazy colors of plastic emerging out of the neutral tones of brown and black and white of the birds. I was hit with nausea at the idea of this bird being filled, month after month, with hard plastic, its parent having no idea it wasn’t providing nourishing food.”

Plastic ingestion by seabirds is a confounding environmental problem, whether for the albatrosses on Midway — located 1,300 miles northwest of Honolulu and within the North Pacific Central Gyre, known for its heavy concentration of man-made marine debris — or for species elsewhere on the planet. Mistaken for prey, the plastic is swallowed and sometimes fed to chicks. Over the past decade, several International Bird Rescue staff and volunteers have had the privilege to visit Midway on cleanup missions as well as an annual albatross count conducted by U.S. Fish and Wildlife Service (click here for photos of executive director emeritus Jay Holcomb’s 2004 trip).

Two recent projects — one scientific, the other journalistic — have caught our attention for their thoughtful approaches to awareness-building on the issue. One, mentioned above, is Midway, a documentary by filmmaker Chris Jordan (Victoria’s husband). It’s currently in the final stages of shooting, though Jordan’s team has already returned with stunning footage of the albatross population as seen in the film’s trailer below. Jordan, a Seattle-based artist whose subjects have ranged from Hurricane Katrina to mass consumption in American culture, is seeking funds for completion of the film via Kickstarter (click here to learn more about the project). 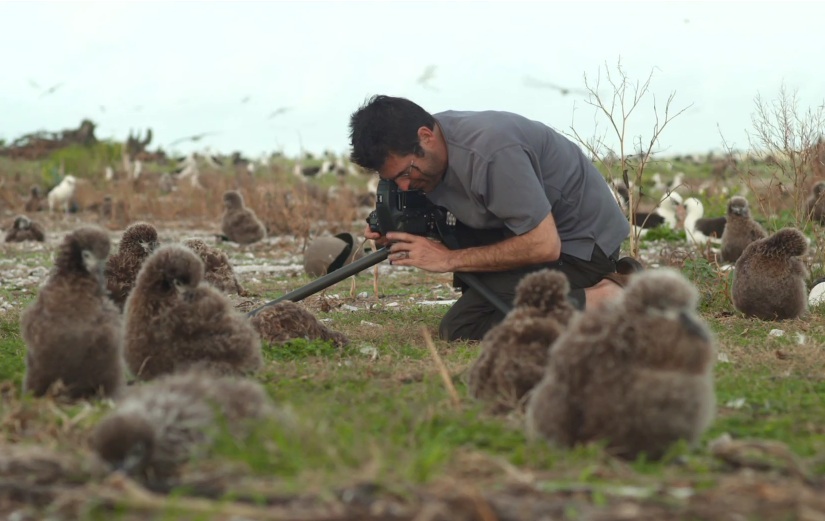 The primary challenge in the project has been filming in high heat and humidity, lashing rain and constant wind. “But the albatross themselves are quite courteous,” Victoria says. “The Laysan Albatrosses in particular are quite calm and allowed the camera very close to them and their nests. It’s pure magic to be able to see such exquisite, high-resolution footage of the birds close up, their beauty and regal nature, to see with such intimacy the hatching of a chick, hear its peeps in the egg, as if you were in the nest.”

Another take on this problem comes in the form of an intriguing new study out of the University of British Columbia’s Department of Zoology and published in Marine Pollution Bulletin.

A research team led by UBC graduate student Stephanie Avery-Gomm examined the stomach contents of 67 Northern Fulmar carcasses — juveniles and adults, males and females — that were collected on the shores of British Columbia, Oregon and Washington.

The Northern Fulmar, a member of the family Procellariidae that includes albatrosses, petrels and shearwaters, is an apt “biomonitor” for measuring plastic debris in part because it feeds exclusively at sea: Avery-Gomm says the contents of a fulmar stomach provide a snapshot of small-sized plastic pollution in the eastern North Pacific. Fulmars have also been used as biomonitors in marine pollution research for decades elsewhere in the world, namely in the North Sea. “They’re like a canary in the coal mine, in that they can help us monitor trends in plastic pollution — the composition of plastic in the marine environment, as well as the amount that they ingest,” Avery-Gomm says.

A staggering 92.5% of the fulmars in the study had plastic in their stomachs — detritus from fishing line and Styrofoam to bottle caps and shards of indeterminate origin. “I expected plastic, but not as much as I found,” Avery-Gomm says. “It was quite shocking.”

Bird Studies Canada, the University of Puget Sound and the Wildlife Center of the North Coast assisted in collection and processing for the project. 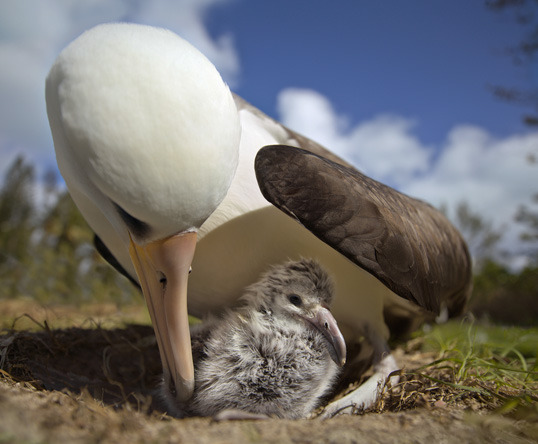 1 thought on “The Perils of Plastics: Two New Perspectives on Seabirds and Marine Pollution”