Remember this Brown Pelican with the monstrous pouch injury we posted earlier this summer? We have good news: The bird recovered and was released after major surgery and weeks of specialized care.

On July 16 2017, a kind-hearted person in Huntington Beach, CA rescued a young Brown Pelican with a horrendous wound. The poor bird’s pouch was completely ripped open, rendering him unable to eat. They brought the starving bird to Wetlands and Wildlife Care Center in Huntington Beach where he was treated for a few days before being transferred to our Los Angeles Wildlife Center in San Pedro, CA.

We found that the entire left side of the bird’s pouch was shredded and the loose dangling flaps of tissue were bruised and swollen from the rude and painful interruption to their blood supply. The bird also was found to have two separate problems with its bill—the upper bill was partially fractured longitudinally half way along its length while the left mandible was completely fractured back by the jaw joint. Our staff splinted the fractures and stapled the tissue in place temporarily so the bird could eat while getting stronger before what would be a very long surgery. 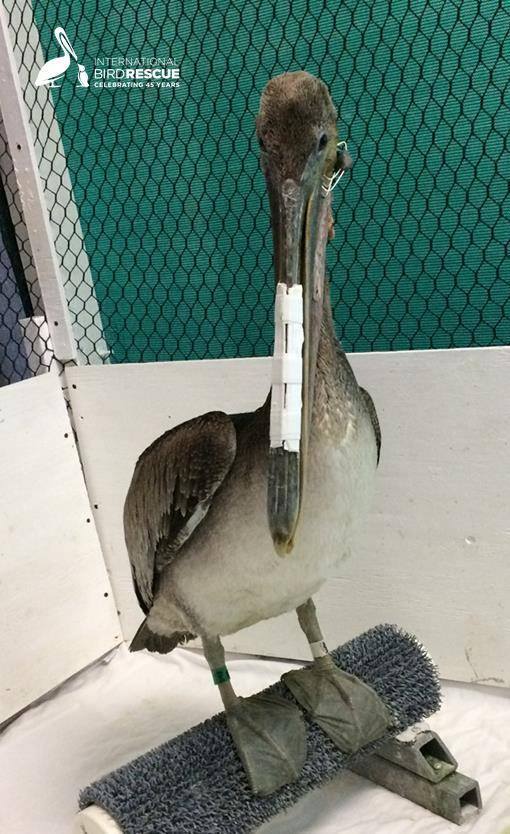 A few days later, our vet decided the splint was sufficient for the upper bill break but the mandible fracture needed to be pinned. Pelicans have unusual bone texture where the bones have huge interior air spaces and extremely thin but strong outer walls. The outer bone wall is so thin that the threaded orthopedic screws usually used to pin bird bones don’t work. So our vet used something rather akin to an abstract work of art called a “spider fixator” to provide stability. Next, she tackled the long process of suturing the pouch back together. Pelican pouch has very fine stripes that run parallel to the jaw that can tell us how ripped pieces are supposed to fit together. Once all the stripes of the shreds were lined up, it became clear that there were really three long straight parallel cuts with the tissue between the cuts ripped free. This suggests the injury may have been caused by a boat propeller.

After the feisty bird had all of his sutures and pins removed, the pelican spent a few weeks in our large flight aviary getting some exercise before we set him free! He is now sporting big blue band “N75,” so keep your eyes out for him flying the coast.

Every Pelican matters and we so appreciate the public’s support of our efforts.