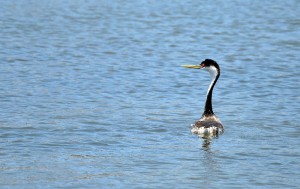 On Friday our team in Southern California released a rehabilitated Western Grebe from the Refugio Oil Spill. This is the first non-Pelican affected by the spill to be released.

The heavily oiled Grebe was collected on May 22, 2015 from the drainage ditch east of of Venadito Creek in Santa Barbara County.

After being washed and recovering from various secondary injuries at our Los Angeles Center, it was released late this week at Cabrillo Beach in San Pedro.

More than 50 oiled seabirds – mainly Brown Pelicans – have come to the center rescued in Santa Barbara and Ventura Counties. The birds were oiled at May 19th Refugio oil pipeline break that spilled more than 100,000 gallons of crude.

As a member of the Oiled Wildlife Care Network (OWCN) the center near the Los Angeles Harbor has been ground zero for this oiled seabird response. International Bird Rescue staff and volunteers, along with other OWCN members, have worked tirelessly to help care for the effected birds.

A total of 252 seabirds have been collected. 57 live oiled birds and 195 birds were found dead. Complete list: http://www.vetmed.ucdavis.edu/owcn/