Skip to content
Home | Blog | The Release Files: Oiled Penguins Get a Second Chance in NZ 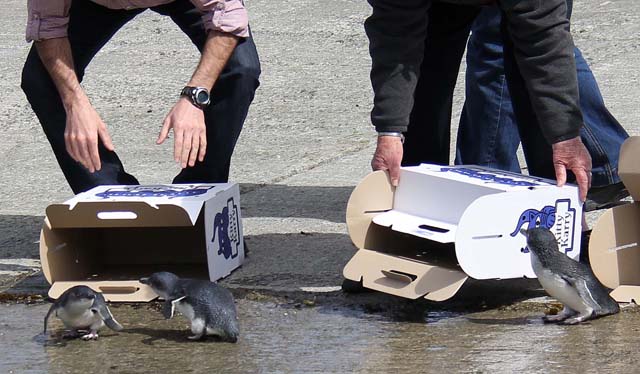 With the one-year anniversary of the Rena Oil Spill nearing, we received good news in our inbox from New Zealand a few days back on a trio of Little Blue Penguins oiled by a recent diesel spill. Here’s the news release, courtesy Bryce Lawrence of Hawke’s Bay Regional Council:

Hawke’s Bay Regional Council’s oil spill response team rescued the penguins after they were found covered in diesel fuel following the spill incident from a moored fishing boat on 7 September.

The three penguins were transferred to Massey University’s National Oiled Wildlife facility in Palmerston North for rehabilitation. The birds were cleaned and cared for at the facility and have since been swimming 2-3 times each day as part of the process to restore waterproofing to their feathers.  The length of swims has increased each day.  The test for release is swimming for six hours without getting wet feathers. All three birds passed this test on Monday.

The penguins were transported from Massey University’s facility this morning, before being released back into Napier’s Inner Harbour.

HBRC’s Incident Controller Bryce Lawrence says the penguins went straight to their burrows and the team is pleased to see the birds going home.

“It is always good to see wildlife returned to their habitat.  It was unfortunate that we had three oiled penguins but, given the conditions of this spill, we were fortunate that we could respond quickly and collect the diesel, and minimise the impact on the penguin population in the Inner Harbour,” said Mr Lawrence.

Hawke’s Bay Regional Council’s Enforcement Team is still investigating the exact cause of the spill to determine whether enforcement action is appropriate.