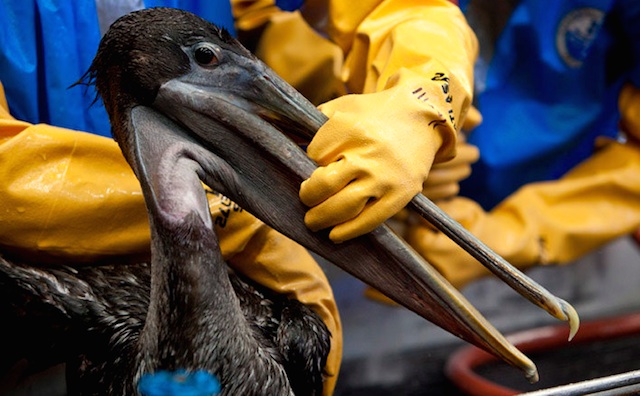 • “Active clean-up” of the 2010 Gulf oil spill has ended, nearly four years after the explosion of the mobile offshore drilling unit Deepwater Horizon, which killed 11 workers and caused a sea-floor oil gusher that spewed 4.9 million barrels of crude oil before the wellhead was capped on July 15, 2010. Via New York Times:

In a statement, BP said that the Coast Guard ended patrols on Tuesday of the final three miles of affected shoreline in Louisiana.

Still, the Coast Guard stressed that a more narrow cleanup response would continue and that crews would remain on the Gulf Coast to respond to new reports of oil. Teams will be positioned to provide a rapid response when they are needed, the Coast Guard said in a statement on Tuesday night.

International Bird Rescue worked with Tri-State Bird Rescue & Research in co-managing oiled bird rehabilitation centers in four states, as part of a large-scale response to the incident that involved federal and state agencies, industry, and non-governmental organizations. You can see photos of the response on our Flickr page. [New York Times]

• A London street artist is painting all of Britain’s unwittingly urbanized birds, including this Chaffinch. [Policy Mic] 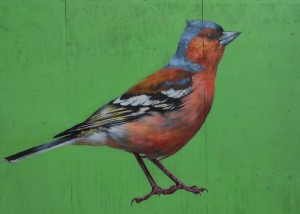 • Coveted commercial shipping sea routes in the Arctic that are increasingly ice-free happen to be crucial marine habitat for millions of seabirds, according to a new study published in the journal Diversity and Distributions. [Alaska Dispatch]

• Earth Day is next week! To honor the upcoming day, our friends at Cabrillo Marine Aquarium have a wonderful event planned this Saturday, the Earth Day Fair and Coastal Bird Fest. [CabrilloMarineAquarium.org]

• Landfill on the high seas: Why is the ocean filled with trash? [NBC News]

• In a brilliant program combining conservation, citizen science and metadata (used for non-nefarious purposes, for once), the Nature Conservancy-backed BirdReturns program pays farmers in the Central California valley to keep rice fields flooded for the welfare of Dunlins and other migratory shorebirds suffering as the result of the state’s epic drought.

What is your wish for the world & how can you win the @TED prize to make it come true? VIDEO: http://t.co/xhTBGHJZvy http://t.co/RDDdM837BI