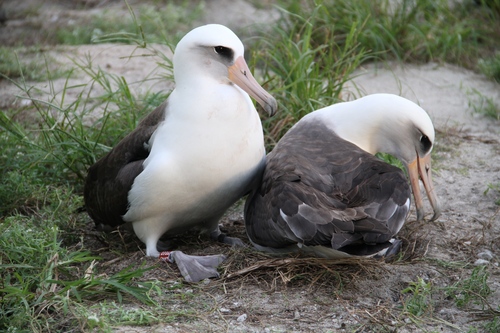 • Wisdom, a Laysan Albatross who holds the title of world’s oldest banded bird, was recently spotted with her life mate readying their nest on Midway Atoll in the Hawaiian Islands. Via U.S. Fish and Wildlife Service:

Laysan albatrosses mate for life and Wisdom has raised between 30 to 35 chicks since being banded in 1956 at an estimated age of 5.  Laying only one egg per year, a breeding albatross will spend a tiring 365 days incubating and raising a chick.  Most albatross parents then take the following year off (and who could blame them?) but not Wisdom.

Nesting consecutively since 2008, Wisdom’s continued contribution to the fragile albatross population is remarkable and important. Her health and dedication have led to the birth of other healthy offspring which will help recover albatross populations on Laysan and other islands. [USFWS]

• Alaska Fish and Game officials are now blaming avian cholera for a mass die-off of seabirds on St. Lawrence Island, located 200 miles west of the mainland in the Bering Sea. Species affected by the outbreak that killed hundreds of birds include Northern Fulmars, Thick-billed Murres and Black-crested Auklets. [Anchorage Daily News] 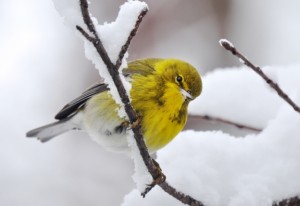 • Wildlife rangers in South Florida are looking for the perpetrator (or perpetrators) behind an attack on several Brown Pelicans found with their pouches slashed.

“It looked like someone intentionally opened up the mouth, stuck some kind of sharp knife in and literally ripped it as far as they could,” said David Hitzig, director of Busch Wildlife Sanctuary in Jupiter. International Bird Rescue has seen many of these cases over the years. [WPTV.com]

• Snowy Owls are confusing runways for tundra at airports. [NatGeo]

• A look at the growing controversy over wind farms and the collateral deaths of thousands of raptors and other birds each year. [SF Gate]

The Burrowing Owl is our 2013 Bird of the Year http://t.co/bRvlo3rsuN #birds

Innovative solutions like this example give me hope for the future of our coral reefs: http://t.co/7qqLJPmzw1