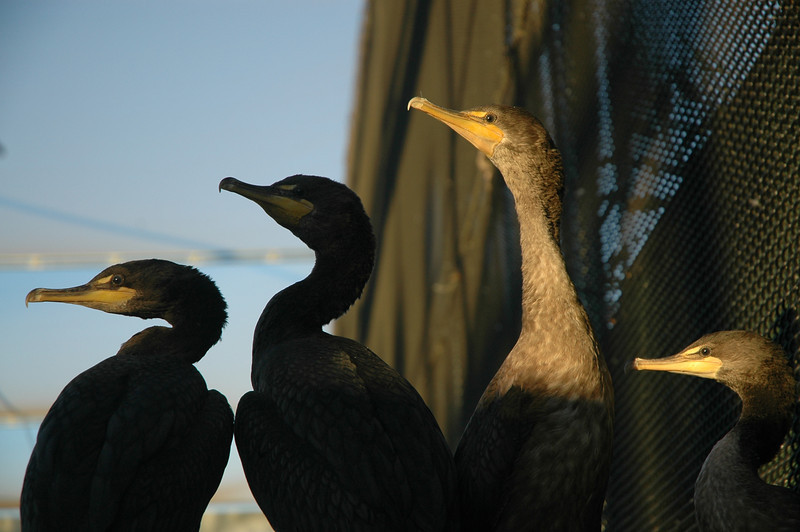 • The Audubon Society of Portland is fighting a proposal by the US Army Corps of Engineers to kill up to 16,000 Double-crested Cormorants (shown above) on an island in the Columbia River in order to aid survivability of juvenile salmon and steelhead. The proposed project, which would kill roughly 20 percent of the cormorant population, also has been roundly announced by Public Employees for Environmental Responsibility; the group’s executive director, Jeff Ruch, called it a “crazy, crude and needlessly cruel plan that should go right back to the drawing board.” [The Oregonian]

• More troubling news on the 2014 population survey of Brown Pelicans on the West Coast, via UC-Davis. [Futurity]

• The first flight of a young Laysan Albatross is captured via live-streaming wildlife camera on the Hawaiian island of Kauai. [National Geographic News]

• Also on Kauai, US Fish and Wildlife Service and the Hawaiʻi Division of Forestry and Wildlife are working with a local utility company to save endangered Newell’s Shearwaters and Hawaiian Petrels.

How? By employing lasers attached to transmission poles and lines to keep the birds from crashing into them. Both birds have suffered a devastating reduction in their numbers in recent decades, largely due to feral cats and invasive species such as the mongoose. [Motherboard]

as an endangered species due to the encroaching effects of climate change. If sea ice continues to decline, at least two-thirds of Emperor Penguin colonies will shrink by more than half their current size by the year 2100, said lead author Stephanie Jenouvrier, a biologist with the Woods Hole Oceanographic Institution. “None of the colonies, even the southern-most locations in the Ross Sea, will provide a viable refuge by the end of the 21st century,” Jenouvrier said. [Phys.org]

• Exploding pollen alert! Read about the marvelous genus of flowers called Axinaea, which have a built-in appendage that explodes when clamped down on by a bird, dusting the animal with pollen. [Science Magazine]

• Scientists are using geolocators for Red Knots, currently considered a threatened species. “To date, all studies of shorebirds using geolocators have changed our conceptions about their migration strategies and the sites they use,” researchers wrote. “This study is no exception. It has revealed previously unknown stopover and wintering sites and a surprising lack of commonality between the eight focal birds in their migratory pathways.” [The Atlantic]

Un-elegant tangling, but thanks to Nick Liberato these 2 Elegant Terns are alive :: http://t.co/8qh0egoYVP : pic.twitter.com/jlX3HLwFAX