• Few sights are more depressing than that of a plastic bag floating down an urban waterway as it heads right for the ocean. Though a worse predicament comes to mind: That same plastic bag entangling and suffocating a bird.

On the West Coast, this sight will hopefully be on the decline.

This week, California became the first state to ban single-use plastic bags from grocery stores and other retailers. Gov. Jerry Brown signed the legislation into law Tuesday, though plastic bag lobbyists have vowed to push for a ballot measure in the Golden State to overturn the environmental victory.

“This bill is a step in the right direction – it reduces the torrent of plastic polluting our beaches, parks and even the vast ocean itself,” Brown wrote in a signing message. “We’re the first to ban these bags, and we won’t be the last.”

It’s yet to be seen whether a campaign to overturn the law will succeed, the Sacramento Bee reported, as more than one-third of Californians already live in municipalities and counties where single-use plastic bags are banned.

Major retailers will be barred from using plastic bags by July 2015, with smaller businesses phasing them out by July 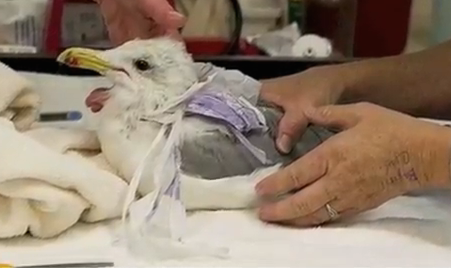 We’re hoping cases like this one won’t be seen again at our wildlife centers: Here, a California Gull is treated by our San Francisco Bay center after a member of the public found the bird struggling with a plastic bag wrapped tightly around its neck and body. [Sacramento Bee]

• An oil spill in Quintero Bay, Chile is threatening a small number of marine bird species including Humboldt Penguins. [The Marine Executive]

• A long-running attempt to relocate Double-crested Cormorants from the old span of the eastern San Francisco-Oakland Bay Bridge continues to face challenges. As we’ve done for several years, International Bird Rescue is at the ready to care for any eggs or chicks that may be disturbed or displaced during this careful process. [San Francisco Chronicle]

• The team at Dawn stops by our Los Angeles center to celebrate World Animal Day and our amazing volunteers! [Business Wire]

• Naturalists in Australia are struggling to eradicate fox predation on Pied Oystercatchers. [ABC-Australia]

Thank you, TED for helping us create the movement that is Mission Blue, and to everyone across our blue planet… http://t.co/zefpEjtimn

This awesome video celebrates the 50th anniversary of the Wilderness Act: https://t.co/MxqvUyiWBS

An illustrated guide to everything you need to know about Marine Protected Areas http://t.co/XqARNVkrBe pic.twitter.com/Dj7UvqjMCX — grist (@grist) October 3, 2014