Did you see Jurassic World yet? In the film, there are four Velociraptors that are shown as fast and savage hunters. Allow me to introduce International Bird Rescue’s very 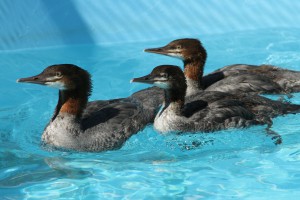 own “Velociraptors”–a set of four baby Common Mergansers that clearly demonstrated in their feeding habits how they are descended from the dinosaurs! Over the past couple of weeks, I liked watching them during feedings as they swam along the surface with their heads submerged to find the minnows below, then darted underwater to torpedo at one or a few.

According to our friends at AllAboutBirds.org by the Cornell Lab of Ornithology:
Common Mergansers are streamlined ducks that float gracefully down small rivers or shallow shorelines. The males are striking with clean white bodies, dark green heads, and a slender, serrated red bill. The elegant gray-bodied females have rich, cinnamon heads with a short crest. In summer, look for them leading ducklings from eddy to eddy along streams or standing on a flat rock in the middle of the current. These large ducks nest in hollow trees; in winter they form flocks on larger bodies of water.

These orphans arrived from San Jose and Sonoma in May and spent the last 2-1/2 months in the capable care of our SF Bay Wildlife Center in Fairfield. I am happy to announce that all four were released at the American River in Sacramento last Friday. We were happy to be able to stablize these orphans and raise them to strong sub-adults that were able to be successfully released to their new home.

Common Mergansers are abbreviated as “COME” using the first two letters of each word, hence the title of this post. You can support Mergansers and other interesting diving ducks with a donation at www.bird-rescue.org/donate.

We love to hear from you, so please get in touch with your questions about Common Mergansers. We’ll post our replies on our Facebook page.