Skip to content
Home | Blog | This season, your chance to reunite wildlife with the wild

On April 16, 2014, a California Brown Pelican staggered between lanes of traffic in Long Beach, Calif., flapping his wings with what little energy he had left. When an animal control officer approached the bird, it became clear why this animal was too exhausted to escape capture.

The pelican’s throat pouch, used to hold fish caught by spectacular plunge diving into the ocean, was mutilated, having been cut from ear to ear.

The story of “Pink the Pelican” is one that begins with the worst of humankind, but ends with the best. In a story followed by national media, Pink was starving as a result of a deliberate attack by an individual or individuals who, to this date, remain at large. Thankfully, pelicans are resilient animals and respond well to expert veterinary and rehabilitative care. International Bird Rescue’s reputation in caring for seabirds is unmatched the world over.

This new patient, who wore a pink temporary leg band while at our Los Angeles wildlife hospital (thus the bird’s nickname in the news), was nursed back to health over the course of several weeks. When Pink was strong enough to withstand surgery, our veterinarian sewed his throat pouch back together — a feat requiring two operations and nearly 600 stitches. It’s your support that makes this hard work to save animals possible. And that’s why I’m writing to you today.

Pink was released on the sunny afternoon of June 5, leaping from his crate and soaring above the waves as Catalina Island loomed in the distance. It was a new chapter of life for this bird. One week later, a chapter of International Bird Rescue’s own history came to a close: Jay Holcomb, our executive director who began his career saving birds from oil spills in 1971, died from cancer at age 63.

We are devastated by this loss and we miss Jay every day. But International Bird Rescue’s mission continues, as we know Jay would have wanted. Your contribution helps support: 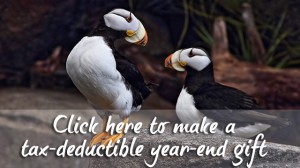 When you give $50, $100, $500 or more, know that your contribution directly saves the lives of animals like Pink. And your gift is tax-deductible. With our patient numbers over 15% higher this year compared to 2013, your year-end gift is more important than ever. Will you help protect the world’s precious birds?

Warmest wishes this holiday season from all of us at International Bird Rescue,

PS- #GivingTuesday, one of our most important online fundraising days of the entire year, is coming up in just a few days. If you’d like to make an additional contribution to serve as a matching challenge for International Bird Rescue online fans, please email us, and we’ll reply ASAP. We could really use your support! Thanks.