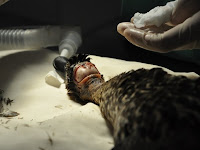 This spring, IBRRC’s San Pedro facility took into care two female mallards with head injuries sustained during breeding. Mallards are known for their aggressive mating practices, during which females can become injured or even drown.

Both mallards had extensive trauma to the scalp, with few to no remaining feathers. The skin had become jerky-like and attached to the skull. This tightened area suffered reduced blood flow, which created a risk of infection. In addition, the bird’s vision was occluded due to tension pulling the lower eyelids upward. Without full vision, a mallard is seriously disadvantaged in the wild.

In a procedure akin to “plastic surgery for ducks,” Dr. Heather Nevill and IBRRC staff gave the girls a new lease on life. Called a “sliding advancement flap,” a portion of skin on the head is surgically loosened and pulled forward, allowing blood supply to return and the bird to regain normal use of its eyelids.

The birds are currently recovering at IBRRC and at the end of their rehabilitation will be released to the wild.