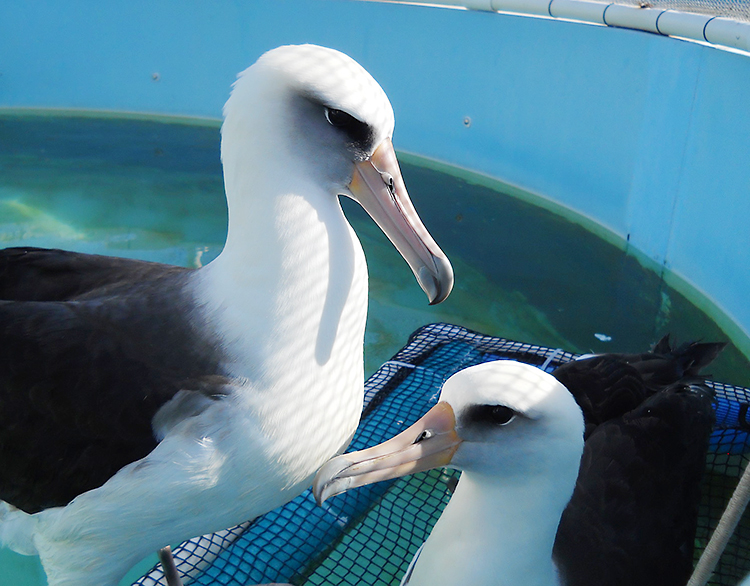 Two Laysan Albatross, rare seabirds for Southern California that were rescued separately in the Los Angeles area, will be released together this week. They were each rehabilitated at International Bird Rescue’s San Pedro center.

One Albatross was rescued on March 21st after being found trapped between two containers aboard a cargo ship headed to the Port of Long Beach. The seabird was also oiled by grease and was cleaned by IBR staff last week. Read earlier blog post: Laysan Albatross Long, Greasy Ride to Freedom

The other Laysan Albatross was found on March 20th in the desert city of Rancho Mirage, about 100 miles from the Pacific Ocean. It was stabilized by The Living Desert Zoo Gardens and transferred to Bird Rescue on March 30th.

We also want to say thanks to the Port of Long Beach for generously supporting the care of these majestic seabirds.

Laysan Albatrosses are frequent stowaways on container ships that travel the ocean highways. They have often been spotted resting or even building nests aboard these vessels.

The stowaway phenomenon is generally considered to be a simple case of mistaken identity. Laysan Albatrosses may see the flat surface of a cargo ship as the perfect new nesting island during breeding season.

With their tremendous 6 ½ foot wingspan, Laysan Albatross can glide long distances – sometimes 300-400 miles in one day. They breed on tiny islands in the North Pacific Ocean about 3,000 miles from California.