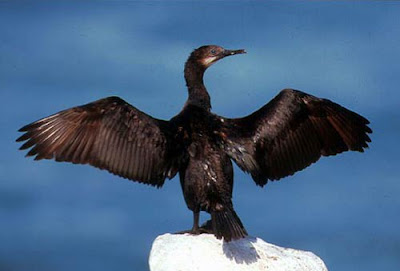 Beginning in mid-April, natural resource agencies began receiving reports of dead and dying cormorants (and occasionally other coastal birds) in the San Francisco Bay Area. Dozens of dead Brandt’s Cormorants were found at a nesting colony on Alcatraz Island, and more that 100 have since been reported or recovered on the coast from Marin County south to Monterey County.

In addition, dozens of live sick cormorants have been recovered by local wildlife rehabilitation centers, including OWCN member organizations WildCare and International Bird Rescue Research Center. More than 25 injured live cormorants have been delivered to the San Francisco Bay Oiled Wildlife Care & Education Center, where staff and volunteers from IBRRC and the UC Davis Wildlife Health Center are providing care to these birds. According to the IBRRC Blog, Exec. Director Jay Holcomb describes the birds in care as “…adults in beautiful breeding plumage…in a weakened state but respond(ing) well to a treatment of fluid therapy and lots of fish”.

The California Department of Fish and Game Marine Wildlife Veterinary Care and Research Center in Santa Cruz is conducting post-mortem exams and taking the lead on investigating potential causes of the unusual mortality event, with assistance from a number of organizations (including the OWCN and the UC Davis Wildlife Health Center). The dead birds found thus far are extremely emaciated, and showing no signs consistent with environmental contamination or infectious disease. However, samples are currently being checked for Newcastle Disease, Avian Influenza, West Nile Virus, and Domoic Acid toxicosis. There is no concern that these birds are carrying the recent H1N1 Influenza A (so-called “swine flu”) virus.

Cormorants feed on small fish that they capture by diving from the surface of the water. If the birds are starving due to lack of prey, it is not currently known what might have caused this abrupt change in prey availability, although the die-off began during a period of unusually strong northwest winds.

There is no need to report dead birds to wildlife agencies and the public is asked to leave dead birds where they are found. Regular surveys are being conducted by volunteer monitoring programs established by the Gulf of the Farallones and Monterey Bay National Marine Sanctuaries to document the number and location of dead birds. If very large concentrations of dead birds are found, they can be reported to the Marine Wildlife Veterinary Care and Research Center at (831) 469-1745.

Live birds in distress can be reported to local animal control or wildlife rehabilitation groups (contact info for local OWCN member organizations may be found here). If wildlife that may be oiled or otherwise contaminated is found, this information can be reported to the Oiled Wildlife Care Network at 1-877-UCD-OWCN.

More information on Brandt’s Cormorants may be found on the Cornell Lab of Ornithology site.