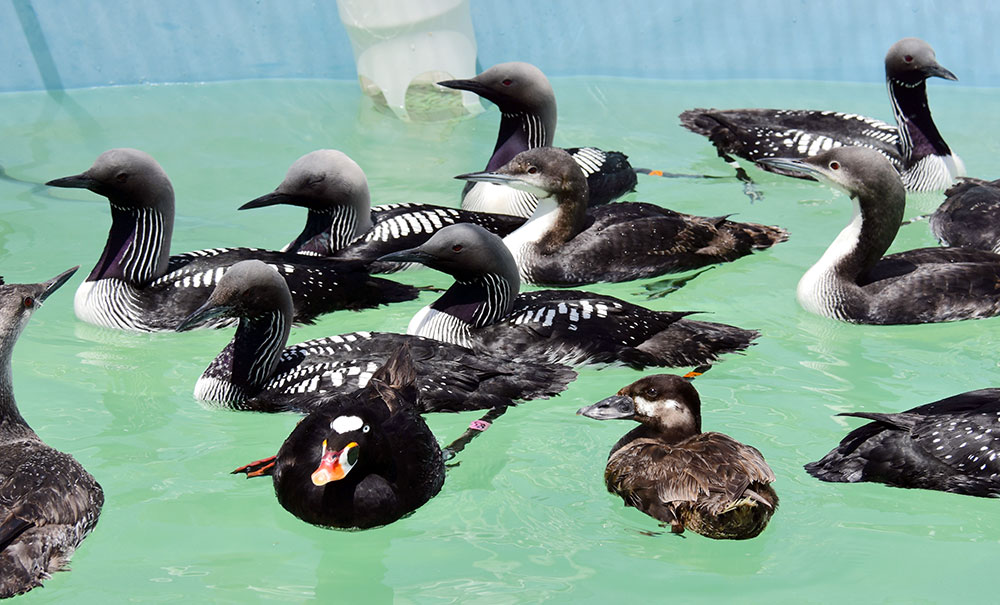 The month of April has not been kind to seabirds in Southern California. Hundreds of aquatic birds – especially Loons – have been found emaciated and sick along Ventura County beaches.

You can help: Adopt a Loon

More than 80 affected birds have come into care at our Los Angeles Wildlife Center since April 1st. The bulk of the rescued seabirds have been Loons. So far 76 Loons (52 Pacific Loons and 24 Red-throated Loons), a handful of Common Murres and Scoters, and one Brown Pelican have come to us due to this event.

The culprit is more than likely a Harmful Algal Bloom (HAB) in the Pacific Ocean. The algae that make up these blooms can produce Domoic Acid, a toxin that causes neurological issues in mammals and birds that eat anchovies, sardines, and crustaceans that have eaten the toxic algae.

Volunteers with the Santa Barbara Wildlife Care Network have rescued the bulk of the affected birds. According to reports, around 300 birds have been picked up alive from local beaches, while hundreds more have been found dead. Many birds died shortly after recue but those that survived more than a short time were transferred to Bird Rescue’s center in San Pedro, CA. Some of the birds were injured while having seizures on the beach and will require several weeks in care to heal their wounds once recovered from their neurologic problems.

The good news is that we have already released 15 rehabilitated birds (12 Loons and 3 Murres) back to the wild in Morro Bay on April 26th. We released so far away on advice from CA Dept. of Fish and Wildlife in order to get the birds away from the algae bloom areas. We hope to have another group of loons ready to release next week. Treating birds affected by domoic acid involves intensive medication regimens and fluid therapy to clear the bird of toxin and treat any abnormal neurologic symptoms.

Please donate now to help support our care of these amazing birds!

“Rescue agencies, research laboratories, and wildlife centers are still compiling data and performing necropsies, but there’s a likely culprit for many of the mortalities: domoic acid, a toxin produced by algae that bloom in the waters off the West Coast, called Pseudo-nitzschia. Dave Caron, a professor of Biological Sciences at USC, runs a laboratory that studies harmful algal blooms. His lab recently analyzed samples from 32 sick sea lions, all of which tested positive for domoic acid toxicity. He’s also had a positive test from a brown pelican brought to International Bird Rescue. Among sea lions, pregnant females are most likely to be affected, and many are prematurely giving birth in Southern California marine centers to pups too young to survive.”

– From a report by the Santa Barbara Independent newspaper