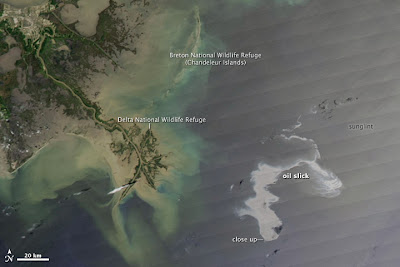 Many people have been contacting IBRRC asking if we are going to be called in to respond to the Gulf of Mexico oil spill. We have been put on alert and are prepared to respond if needed but we have not been activated yet. (See NASA image from space, above)

As of today the spill is still over 30 miles offshore. That is good for coastal birds but it all depends what happens with the winds and currents. There are trajectories that show that if the certain conditions occur then some of the oil could impact coastal areas anywhere from Louisiana to Florida. See: Oil Spill Expanding, May Reach Gulf Coast

If the spill stays offshore then the impact will likely be minimal to birds. Coastal birds that are highly at risk if the spill hits shore are brown and white pelicans, terns, gulls, shorebirds, skimmers and herons. Nesting and feeding areas for birds and sea turtles such as marshes and beaches could be impacted.

The good side of this situation is that there are not large populations of pelagic birds that float or feed in the offshore areas unlike the Northern Pacific and Atlantic Ocean regions where massive populations of marine birds tend to forage and raft up. So, impact to bird species in the offshore gulf region is very limited as long as the oil stays significantly off shore. Sea turtles are vulnerable to these types of spills as they have been known to mistake globs of floating oil for food and they have to come up for air so there is possible impact there.

We will keep our blog updated and let everyone know if we are activated. In the mean time all of the news media is keeping a good eye on the situation and they will provide updates and current spill trajectories.

Thanks for your concern,

An oil leak from the Deepwater Horizon well in Gulf of Mexico is causing widespread concern for the fragile ecosystems along the coasts of Texas, Louisiana, Mississippi, Alabama and Florida. Last week a BP leased oil rig 50 miles off the coast of Louisiana, blew up and caught fire. At least 7 crewmen were injured and 11 missing men are now presumed dead.

After the oil rig capsized up to 42,000 gallons (1,000 barrels) of oil are spilling into the Gulf daily. Up to 700,000 gallons of diesel fuel also leaked into the Gulf when the Deepwater Horizon oil rig went down. It may take months for BP to cap the oil leak deep beneath the ocean floor.

Fires could be set to burn oil spilled in the Gulf of Mexico: LA Times

5 thoughts on “Update on Gulf of Mexico oil spill”