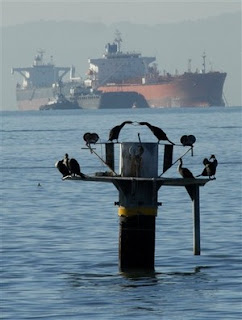 One of the biggest collection points is in Alameda at Crown Memorial State Beach just southeast of the San Francisco-Oakland Bay Bridge where the Dubai Star leaked bunker oil during a refueling operation. Coast Guard reported 400 to 800 gallons of very toxic bunker oil spilled about 2 1/2 miles south of the bridge.

From OWCN’s blog this morning:

The first oiled birds that we sighted included a Western Grebe, an Eared Grebe, and a Surf Scoter. These birds were active and we could not catch them. By about 1400-1500, we had our first oiled birds beaching themselves along the Alameda shoreline, especially along the Crown Beach area. One thing that we really appreciated is that many people heeded the warning notices and did not walk on their neighborhood beaches, instead letting us walk the beach trying to catch birds. Quiet beaches allow for the birds to settle down and this is the point where we can come in and catch them.

At one section of Crown Beach we caught over 10 oiled American Coots and even some oiled shorebirds. By 1600, we had a load of birds in one of the OWCN trucks headed for our primary treatment facility, the San Francisco Bay Oiled Wildlife Care and Education Center, by Cordelia. Some of these birds were heavily oiled and needed rapid treatment.

Tomorrow will undoubtedly be a very busy day for us. We will have at least eight teams of trained responders out on the beaches trying to capture any oiled wildlife that we might encounter. Additionally, we will have a team of US Fish and Wildlife responders and their boat out with us, as well as members of the Golden Gate Audubon doing reconnaissance work around the shores of San Francisco. They will help us by keeping an eye out for birds in distress in areas that we are not getting to regularly because there is no reported oil in those locations.