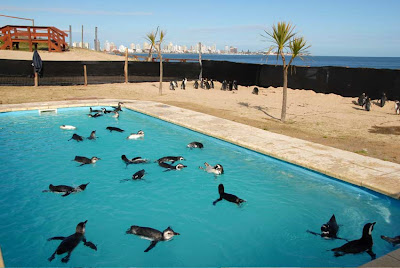 A recent oil spill in Uruguay is making it tough on migrating penguins and other birds along the coast of this South American country located between Argentina and Brazil. Magellanic Penguins are the most affected by the spill that occurred when two ships collided about 12 miles (20 km) from the port of Montevideo, Uruguay on June 3, 2008.

A joint IFAW/IBRRC Emergency Response Team is on-site and working with other area wildlife rescue groups to help with the logistics and treatment of the oiled birds. A swimming pool at a Punta Del Este beach-side waterpark is being used to help the penguins recuperate.

A total of 139 birds are in house and being cleaned and reconditioned for release back into the wild. This includes three great grebes, 135 Magellanic penguins and one giant petrel. 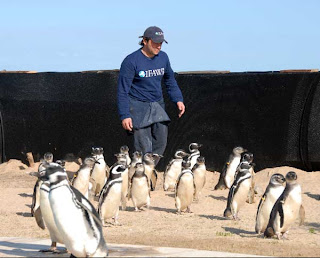 According to an IFAW report, the ER team has had great successes this week as they have been able to clean all the birds that were healthy enough to go through the stressful cleaning process. A good majority of the penguins are clean and in waterproofing pools, reconditioning for release. One of the major problems for these birds has been that they’ve come in to care in such debilitated conditions and most are extremely under weight. Oiled birds often become obsessed with preening their feathers to try to remove the oil and ignore feeding or they become so hypothermic, due to the oil disrupting their waterproofing ability, that they beach themselves and then don’t eat or drink. Medically stabilizing these birds is a big part of what our team does so successfully and this is evidenced by so many of these birds being healthy enough to go through the cleaning process already. At this time, there are 101 clean birds and only 29 that are still underweight or anemic and are being given supportive care until they are healthy enough for cleaning and reconditioning. Two great grebes that were oiled have been cleaned, reconditioned and were released this week! The team is tentatively planning a release of the first penguins for next Wednesday, July 9.

The oiled birds swam through the spill when the Greece registered ship, the Syros and the Sea Bird, a vessel registered in Malta, collided near Montevideo. The collision produced a 12 mile long oil spill near the Rio de la Plata river.