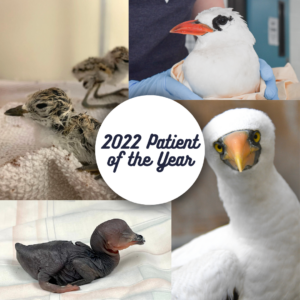 What an eventful year it’s been for Bird Rescue. Between our two California wildlife centers, we’ve provided care to more than 3,380 bird patients while also responding to oil spills in Lima, Peru, Medford, OR, and Sacramento CA. We need your help in choosing the official 2022 Patient of the Year. After much consideration, we’ve narrowed it down to four birds, who each had to overcome their unique challenges that can affect all birds in a changing world.

Read more about each of the candidates below, and then cast your vote.

**Reminder: Enter your name and e-mail address to be entered to win a beautiful 2023 Bird Rescue calendar!**

A rare patient: a Nazca Booby, was found in front of a sushi restaurant in Newport, Oregon in January. Their usual range extends from islands in the Pacific Ocean to Baja California, and south to Ecuador and Colombia. He was stabilized at Oregon Coast Aquarium before being transferred to our Los Angeles wildlife center in San Pedro, CA, where he was treated for emaciation. Read more about his case here.

This Western Snowy Plover chick got off to a rocky start when he arrived to our San Francisco Bay-Delta wildlife center hatching out of a damaged egg. After much effort on the little one’s part, it became apparent he needed help when we noticed part of the smooshed shell was stuck to his head. With some TLC from our staff, he quickly grew stronger. This fragile hatchling proves strength comes in all sizes. Each individual bird in a threatened group is of extreme importance to the survival of the species. Watch a video about his care on Youtube.

A container ship delivered more than they bargained for when a crew member heard a noise coming from the engine room and discovered an unusual stowaway. Beneath black soot was a thin, dehydrated Red-tailed Tropicbird. These exotic waterbirds are not often seen by people because they rarely forage for fish within sight of land, and they nest on offshore islands in the Pacific and Indian Oceans. Read more about her case here.

Habitat decline is one of the challenges birds face in a changing world. 38 Double-crested Cormorant chicks and eggs were rescued from electrical transmission towers in San Mateo County when their nesting area became a potential fire hazard. The eggs and hatchlings received round-the-clock care by our staff and volunteers at our San Francisco Bay-Delta wildlife center until they were old enough to care for themselves in the wild. Read more about their case here.

When up to 6,000 gallons of diesel fuel shut down Tanzanite Park in Sacramento, CA, American Beavers were among the wildlife recovered from the spill incident. Because diesel can quickly cause burns, oil-impacted wildlife need to be rinsed quickly and then stabilized before a more thorough washing occurs. After receiving a wash at the San Francisco Bay Oiled Wildlife Care and Education Center, they are transported to Sonoma County Wildlife Rescue for continued rehabilitation. In order to identify individual beavers, their nails are painted with non-toxic polish and a microchip is implanted.